Photo of a dust spiral, surrounding Saturn from Cassini 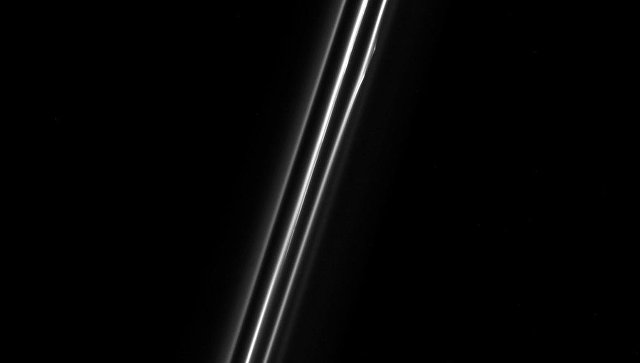 The probe “Cassini” gave all in love amazing pictures of the F ring, one of the outer rings of the giant planet, similar in structure to a layer cake and spiral, according to NASA.

The rings of Saturn, today scientists believe, arose as a result of the destruction of the “embryo” of the planet in the early days of the Solar system. He came too close to the planet, the giant, was ripped apart by tidal forces and crushed into many small fragments, the densest of which was “eaten” by Saturn and Titan, and the rest formed the material of future rings.

Cassini, which flew Monday for the eleventh time through the rings of Saturn, has obtained pictures of the F ring from a distance of only 11 thousand kilometers from the surface. The probe studied the composition of the particles which make up the structure and the form of this cloud of matter, and caught a few of them with the help of the device CDA. These images have helped scientists to see the inside of this ring there are several clearly separate layers, combined in a kind of spiral.

Today planetary scientists believe that this spiral, enveloping Saturn, was the result of the span one of the moons of a giant planet through the ring F. Its interaction with the “river” of dust orbiting Saturn, destabilized it and caused her to split into several parts, some of which revolves parallel to the main ring, and the other stretched out in a kind of spiral line above and below the ring F.

Cassini obtains images of this structure since December of last year, as scientists interested in how the laws are changing is the ring of Saturn, the turbulent cloud of dust and ice in orbit around the giant planet. New photos of the ring were obtained from the minimum distance when flying between him and a giant planet that allowed scientists to study in detail the structure of each of the parts of this gas and dust “puff”.

In addition to this ring, Cassini also studied a giant hexagonal storm on the South pole of Saturn, and made a map of the distribution of hydrocarbons in different layers of the atmosphere of the planet giant.

During the next cycle, which will start very soon, this Friday, Cassini will get photos of the star beta cross and VY Canes venatici, the light which will temporarily close the rings of a giant planet, will get pictures Epithema, one of the small moons of Saturn. In addition, the NASA probe will follow the birth of “propellers” in the rings of Saturn, and closer to the F ring at an even closer distance – 8700 kilometers.