Photo of the Earth and the Moon from Saturn’s orbit 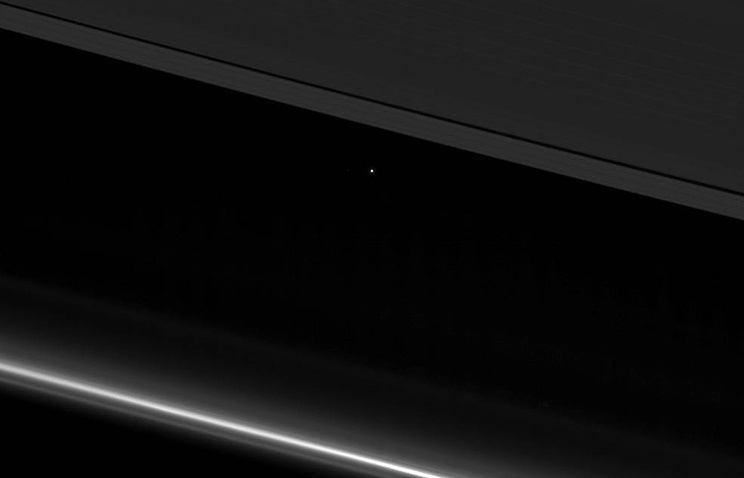 A photo of the Earth and the Moon, made from the orbit of Saturn, was published on Friday by the US National Aeronautics and Space Administration (NASA).

In a picture taken with the help of Cassini automatic station equipment from a distance of 1.4 billion kilometers, our planet appears as a tiny light point on the black velvet of space, to the left of which lies a hardly visible pale point – the Moon. The uniqueness of the picture is also in the fact that it is made through the rings of Saturn – in the upper and lower part of the photo, the sections of the rings of the giant planet illuminated by the Sun are visible, consisting of fragments of ice.

In July 2013, the station was already transferring to the ground a snapshot of the end of Saturn and the scarcely discernible light points – Mars, Venus, Earth and Moon.

The Cassini station, launched on October 15, 1997 and launched into orbit around Saturn in 2004, gave scientists the opportunity to study the system of a giant planet, in particular its satellites. Thus, geysers were discovered on Enceladus, a methane lake was discovered on Titan, clear photographs of Mimas were obtained. In addition, the equipment Cassini allowed to explore the giant storms in the atmosphere of Saturn.

In April, the last stage of research began, which scientists called the “Grand Final”: the station will fly 22 times Saturn, moving between the surface of the planet and its rings. This is a fairly complex maneuver, especially given the threat of a Cassini collision with a large wreckage. On the night of April 22, the station should pass near the largest satellite of Saturn – Titan.

If everything goes according to plan, then it will be possible to obtain data on the magnetic field of Saturn and, possibly, the answer to the question of how long its rings were formed. Now scientists are voicing different hypotheses in this regard: some believe that the rings formed simultaneously with the planet, others consider the ring fragments of a satellite that collapsed under the influence of the planet’s attraction or the traces of a comet captured by Saturn. On September 15, Cassini will enter the upper atmosphere of Saturn and cease to exist.

This maneuver is necessary in order to prevent the possibility of any terrestrial microorganisms from entering the station at Titan or Enceladus – satellites of Saturn, on which theoretically life could exist.