Photographs of planets at a record distance from the Earth 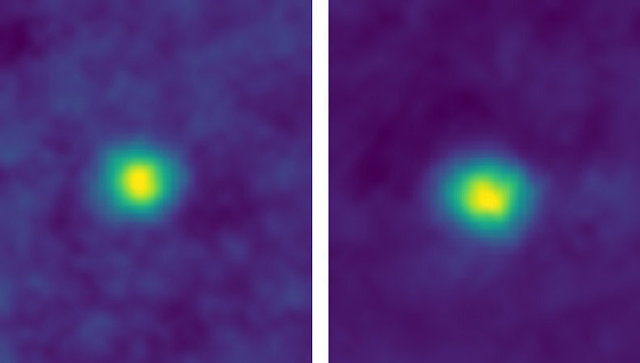 The New Horizons probe transmitted to the Earth photos of two dwarf planets received by its cameras at a record distance of 6.12 billion kilometers from our planet, NASA reports.

“New Horizons is a pioneering mission – we were the first to see and study Pluto, we were the first to penetrate the Kuiper belt and begin to study it, and have become the fastest interplanetary probe that humanity has ever launched. far away from the Earth and share it with the world, “said Alan Stern, head of the mission from the Southwest Research Institute in Boulder, USA.

Thus, the photos of two Kuiper objects – 2012 HZ84 and 2012 HE85 – broke the record established by the Voyager-1 probe almost 28 years ago, in February 1990. On this memorable day, as NASA tells us, the cameras of the longest-lived interplanetary station received a famous photo of the Earth, a “dull blue dot”, watching it from a distance of about 6.06 billion kilometers.

“Voyager” held this space record for 27 years – after receiving this photograph, the probes were turned off, and in the next three decades no spacecraft was removed so far from the Earth.

The New Horizons probe has now traveled about two-thirds of the way to its next target, the dwarf planet 2014 MU69, which it will reach early next year. Every day the probe flies about 1.1 million kilometers, periodically awakening and receiving new photos of the near-by Kuiper objects and other celestial bodies, as well as observing changes in the composition and properties of the surrounding matter.

Observations of the “shadow” of 2014 MU69, which NASA scientists spent last summer, showed that this heavenly body is a double planet, a pair of relatively large asteroids. Each of them has a diameter of about 15-20 kilometers, which makes them analogues of Deimos and Phobos, the moons of Mars.

The first pictures of this dwarf planet can be obtained this summer, when New Horizons temporarily go out of hibernation and check the work of all of its scientific instruments. As scientists hope, these images and data will help them to optimize the program of observations and to understand if the probe threatens the nearest approaches to the 2014 MU69.