Physicists “brought to life” an alternative theory of gravity 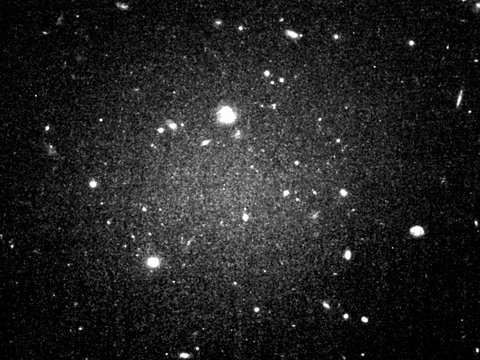 An international group of researchers, including physicists from the University of St Andrews, Scotland, “brought to life” the previously “debunked” theory of gravity, arguing its position by the fact that the movement of stars inside a dwarf galaxy is slower if such a galaxy is located next to a massive galaxy.

In this study, this team, led by Pavel Kroupa, a professor at the University of Bonn, Germany, and Charles University in Prague, Czech Republic, critically analyzed a study published earlier in the journal Nature, which claims to find evidence of the insolvency of the modified Newtonian dynamics (modified Newtonian dynamics, MOND). According to this early research, the MOND theory can not be true, since the motion of stars inside the dwarf galaxy NGC1052-DF2, a small galaxy of about 200 million stars, turned out to be too slow compared to calculations based on this theory of gravity.

MOND theory is an alternative to Einstein’s General Relativity and allows one to describe the motion and interaction of astronomical objects on large scales without attracting the notions of dark matter and dark energy, “adding” additional gravity in places where gravity is relatively weak. Where gravity is relatively strong, for example in the solar system, the parameters of the equations of the theory of MOND are close to those for traditional Newtonian dynamics.

In his new analysis, Croup and his team show that their criticism of scientific work does not take into account the gravitational influence of massive objects in the vicinity of the dwarf galaxy in question, on the motion of stars inside it. In other words, if a dwarf galaxy is located close to a massive galaxy-which just happens in the case under consideration-then the movement of the stars in it will occur more slowly, the researchers show.

In conclusion, Croupe said: “Theories of MOND have repeatedly predicted” death, “and relevant studies have been published even in very authoritative journals. However, so far none of these statements have stood the well-grounded critical analysis. “