Pits and scars on the surface of the asteroid Ultima Thule 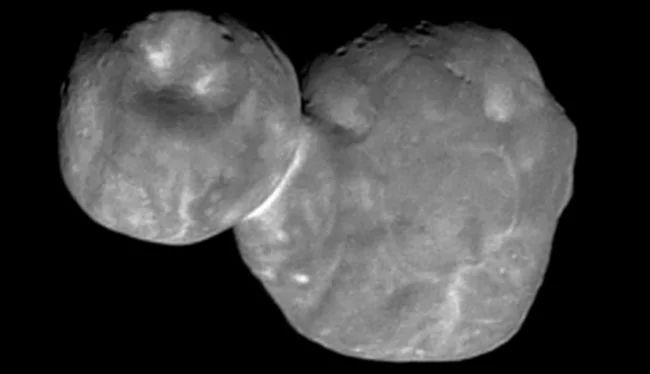 In early January 2019, the New Horizons space probe flew past the asteroid Ultima Thule, the most distant object ever explored by humans. The photographs taken by the apparatus are still transmitted to Earth, and each time their resolution and detail grow. Recently, astronomers have received a new picture, which clearly shows multimeter pits and strange grooves on the surface of the object. Scientists already have suggestions on how they were formed.

The photo was taken at a distance of 6700 km from the object – for comparison, past photos were taken when the device was distant by 17,000 km. Thanks to the MVIC wide-angle camera, the frame resolution was an impressive 135 meters per pixel. It is already very clear that Ultima Tule is a rather lumpy object, studded with small pits with a diameter of up to 700 meters. It has the shape of a dumbbell, and on the smaller side there is a particularly large dimple with a width of about 7 km – he even won his own name “Thule”.

Also in the photo are visible “seams”, and the brightest of them is in the bridge between two objects. The researchers suggest that the irregularities on the surface of the asteroid were formed by the impacts of other space objects. As if there wasn’t, they still have no evidence for this hypothesis – they have a lot of work ahead of them.

It is noteworthy that the photo was transmitted to Earth with a delay due to interference caused by the sun. Researchers at the time stopped the operation and waited for the restoration of communication. At the moment – this is the clearest picture of the object, but then they will be even better.