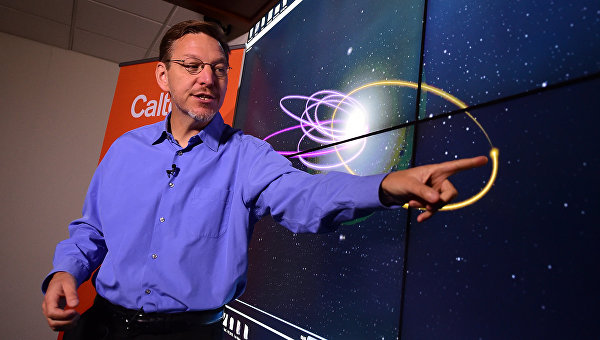 Astronomer Konstantin Batygin, one of the pioneers of heavy mysterious planet X, suggests that the ninth planet of the Solar system could be stolen the Sun from his neighbors in the stellar nursery where it was born.

I am a fan of the theory of birth of giant planets in a distant part of the protoplanetary nebula, however, this scenario of birth of the ninth planet the most unrealistic – its birth on the spot would require a giant protoplanetary disk with a mass of 1.2 Suns, who could not be stable in principle. There are two options – she could be thrown to the outskirts of the Solar system or be stolen from another star, ” says astronomer.

The mystery of the ninth planet

In early January two well-known planetary scientist, Konstantin Batygin and Michael brown, announced that they were able to calculate the position of the mysterious planet X the ninth (or tenth if you count Pluto) planets of the Solar system remote from the Sun 41 billion kilometers and weighing ten times more than the Earth.

Due to the vast distances to this planet (one rotation around the Sun, planet X, scientists estimate that makes 15 thousand years) scientists do not yet know where it is. In addition, there is no evidence of its existence, in addition to the strange nature of the movement of a number of dwarf planets and asteroids in the Kuiper belt.

According to batygina, even those scant details of its appearance and orbit, which are now available to scientists, allow to speak about a kind of criminal past of the Solar system or its abusive treatment of their own children-planets, through which planet X was banished to the outskirts of our planetary family.

And the script, as noted by the Russian-American astrophysicist, requires one important thing – the Sun was born inside of a densely populated star nurseries, where his neighbors were dozens and hundreds of young stars located a few light years from our sun.

In the first case, the Sun would steal a planet from another star, with which it has close during his first travels in space. In the second case, the gravitational interaction with other bodies could have been thrown from planet X near the Sun part of the protoplanetary disk, where she was born, to her current position beyond the orbit of Pluto.

Interestingly, a similar scenario as noted Batygin, spoke in favor of the fact that the original Solar system could have not four, but five gas giants, one of which is a planet X has been exiled to the suburbs in the first 100 million years of life in the Solar system.

The idea of the capture of the planet, according to batygina, more interesting in itself, but it is less likely from the point of view of calculations than emissions of planet X on the outskirts of the Solar system. On the other hand, the idea of ejection of the gas giant is not without problems, as it is not compatible with the existence of so-called late heavy bombardment – a period of intense bombardment of the Earth and other terrestrial planets by asteroids and comets, what happened about 3.8 billion years ago.

Therefore, the precise answer to the question, how was born on planet X, we will probably be able to only when astronomers know exactly where it is, and will study its chemical and isotopic composition.

The discovery of the ninth planet gets the science of the Solar system to its previous state – now we again have a puzzle with a bunch of mismatched parts that need to somehow combine into a unified whole. This is probably due to the fact that the part of this puzzle, which is the ninth planet, has not yet been studied, and therefore we can only speculate what it is. I would like to stop speculating and get some clarity on this issue, concludes Batygin.