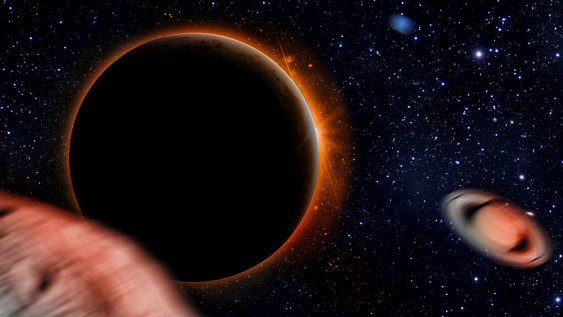 Planet X, that big, dark and cold wanderer, according to astronomers, is now the orbits of Uranus and Neptune, but when she gets close, the gravity will throw away the Uranus with Neptune beyond the Solar system.

Since the first official reports about the existence of Planet X (scholars call it the ninth planet, astrophysicists reveal any new data about what this planet means to our own Solar system.

The results of new research by British astronomers show that nothing good for this planet we are not heralds. Planet X poses a real danger to all the planets of our Solar system.

According to astronomers planet X is very large, it is 10 times heavier than Earth and is 4 times more than its size. Making a complete revolution around the Sun for 10-20 thousand years, it causes serious abnormalities in the movement of the ice comets in the Kuiper Belt. Dimitri Veras with a team of astronomers from the University of Warwick have modeled the impact of Planet X on the other planets of the Solar system.

Uranus and Neptune gravity of this planet will be ejected from the Solar system, and take a journey through the Galaxy. Of course the most important question is, when will this catastrophe, but scientists have yet to answer can’t. For this we need to detect a Planet X visual, to calculate its orbit and determine when she appears in our system.

Planet X can kill a Solar system, and this is a fantasy of futurists, and is a scientific fact, say the researchers.