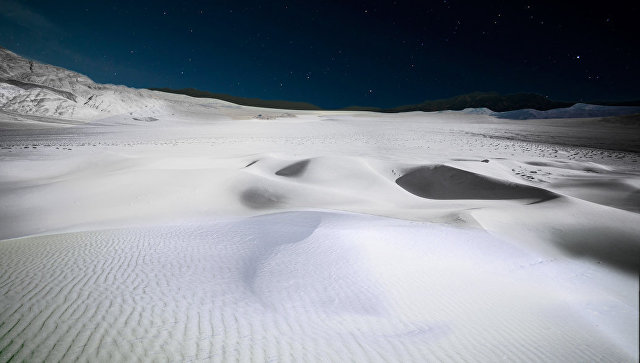 Three years ago, NASA’s New Horizons spacecraft flew past the dwarf planet Pluto and its largest satellite Charon, taking pictures with a higher resolution and gathering a lot of information. Astronomers call this pair a double planet and argue about its origin. What do we know about Pluto now?

Until recently, there was so little information about this celestial body that it was rarely mentioned even in science fiction. They were discovered in 1930. Long considered the ninth planet of the solar system, the most distant from the star. One year on Pluto is 248 Earth years. The orbit is strongly inclined and intersects with the orbit of Neptune, but so that the collision is impossible. Five satellites revolve around Pluto.

Eventually it turned out that the mass of Pluto is too small to be considered a real planet. Because of the unusual orbit, it was assumed that in the past he was a companion of Neptune. This hypothesis is not considered now. Nevertheless, since 2006, Pluto has been officially recognized as a dwarf planet.

Pluto belongs to the Kuiper belt – the accumulation of ice bodies, thrown to the backyard of the solar system at the time of its formation. In July 2015, NASA’s New Horizons space station reached Pluto. The device flew past the planet at a distance of 12.5 thousand kilometers. I collected information for nine days. On this, his mission did not end: in early 2019, the station will begin studying the Kuiper belt.

Information transmitted by the “New Horizons” surprised scientists. Pluto found an atmosphere – though very sparse. There continues to be quite a stormy geological activity, although the planet is completely icy. For comparison – our Moon, located much closer to the Sun, is devoid of atmosphere, nothing happens in its depths. Based on the data obtained, the scientists made some conclusions about the internal structure of the dwarf planet and its largest satellite, Charon.

Pluto and Charon revolve around a common center of mass, located beyond them. Therefore, astronomers prefer to talk about a double planet – Pluto – Charon. This pair was formed more than four billion years ago from relatively small planetesimals – embryos of planets, consisting of stones, ice, dust.

According to the prevailing hypothesis at an early stage, a large space body crashed into Proto-Pluton, literally squeezing out of it an ammonia ocean and creating a gravitational anomaly on the site of the crater. As a result, the protoplanet, having turned over, changed the orbit. Four small ice satellites gradually formed from the emerging dust cloud.

Incidentally, the simulation of the history of the appearance of the Pluto-Charon pair led scientists to the idea that the Proto-Earth at an early stage had several satellites. According to the main hypothesis, the impact of the meteorite knocked out enough material from the Proto-Earth to form the Moon in orbit. And smaller bodies simply flew beyond the force of attraction and are now somewhere at a distance no closer than 800 thousand kilometers, if, of course, they survived the process of formation of the solar system.

Pluto can still conceal a syrupy salt poisonous liquid, mostly from ammonia, under a multikilometer layer of ice.

The ocean is illustrated by a vast lowland, located 2.5 kilometers below the average surface of Pluto. It is called the Sputnik Plain. Gravitational anomaly and the form of tectonic depression indicate that under the ice is a liquid body that does not allow ammonia to freeze, as well as the energy of radioactive decay from the stone core. Another sign of the ocean is the radially diverging faults that pierce the plain. However, scientists emphasize that all these evidence are indirect. 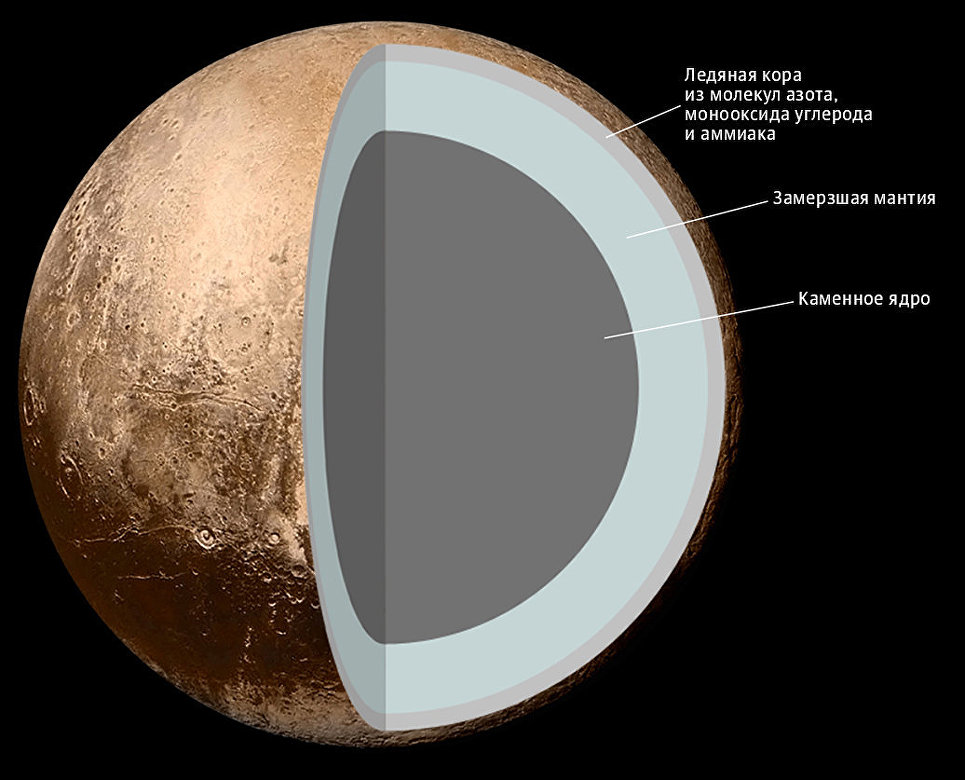 The structure of the dwarf planet Pluto

The stone core of Pluto is shrouded in a mantle of water ice with a power of about three hundred kilometers, and a glacier consisting of nitrogen, carbon monoxide and ammonia molecules covers the planet.

Astronomers were amazed by the diversity of the surface relief of a dwarf planet. The Plain of Sputnik is divided into polygonal cells by cracks of a depth of one kilometer. Everywhere there are a lot of pits and bumps, possibly iceberg icebergs, emerging from the mantle. The absence of pronounced impact craters suggests that the surface was formed by geological measures recently – no later than ten million years ago. In total, on Pluto about five thousand craters from meteorites.

Near the plain there are mountain regions with five-kilometer peaks. Most likely, this is the result of cryovolcanism – when from the bowels instead of red-hot lava liquid ammonia, water or methane flows. There is no such thing on Earth. Cryovolcanism is observed on the satellites of other planets – Tritone, Enceladus and, probably, on Titan.

The mystery of the Tartarus Dorsae remains with the surface, like an excised razor. And the sections stretch for hundreds of meters and kilometers, the depth is also kilometer.

The world of ice and methane dunes

Pluto reigns monstrously cold: the temperature is only 30-40 Kelvin above absolute zero, on the order of minus 234 degrees Celsius. Slightly warmer at the north pole, which has been facing the Sun for several dozen Earth years.

The frozen surface of Pluto loses volatile components, mainly nitrogen and carbon monoxide. Probably, because of the sublimation, holes and “razor cuts” were formed in the ice.

The atmosphere on Pluto is extremely sparse – it’s just a light haze. It is dominated by nitrogen molecules, methane, a little water vapor. There is no free oxygen. So you can not even talk about traces of life in this frozen world.

But on the planet there are dunes, and hence the wind. To such a conclusion came a large international group of scientists. Studying the relief of the Sputnik Plain, they saw ripples and decided to formulate conditions under which such geological forms could have formed.

Sand dunes are many on the Earth, they are on Mars, Venus, Titan. They need a wind capable of carrying large masses of particles, material for the particles from which the dunes form, and actually the place where they would be fixed. It looks like all this is on Pluto. The material for dunes is crystals of methane ice.