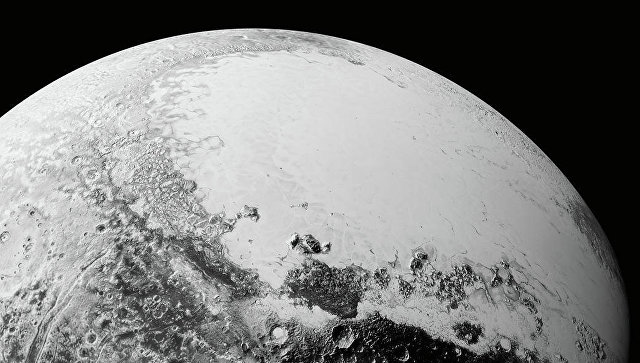 The orbital telescope Chandra for the first time allowed scientists to see the x-rays generated by the Pluto and evidence of the unusual nature of the interaction of its atmosphere with the flux of solar particles.

To conduct observations of our colleagues doubted that we will be able to detect at least some x-rays emanating from Pluto, and so many have offered not to observe them with Chandra. Before our discovery of the most distant planet, which we observed in x-rays, was Saturn, ” said Scott walk (Scott Wolk of Harvard-Smithsonian astrophysical center in Cambridge (USA).

Walk and his colleagues unexpectedly and other astrophysicists have discovered that Pluto’s atmosphere somehow yet inexplicably produces x-ray radiation, observing the largest dwarf planet in the Solar system through Chandra during the span of the probe New Horizons through the Pluto.

How to tell the scientists, the combination of observation from a distance, using orbital telescope, and close measurements allowed them to fully explore Pluto and to understand that the source of this mysterious radiation are most likely the particles of the solar wind interacting with the atmosphere of the dwarf planet.

It turned out that the power platinovogo x-ray emitter is approximately 200 megawatts, which is the average for other bodies in the Solar system, located much closer to the Sun than Pluto.

The problem is that x-rays emitted by Pluto, are approximately an order of magnitude more bright than shown by theoretical calculations, taking into account the birth of x-rays by friction of the particles of the solar wind on the atmosphere of Pluto.

Additional problem creates the fact that Pluto’s atmosphere, as shown by measurements on New Horizons, was much more stable than originally suggested by scientists, and it interacts less with the solar wind than aerial shell other dwarf planets, moons and gas tails of comets. With all of this, according to observations with Chandra, Pluto in the x-ray behaves the same as comets, and not as a planet, as shown by New Horizons.

Therefore, scientists still no explanation as to why Pluto is still visible to us in the x-ray range. Perhaps, as suggested by the Walk team, to blame long gas tail stretching from the Pluton and surrounding the entire system, but signs of its existence until it was found in data from New Horizons. Another possible option is the presence of certain interplanetary magnetic fields, which direct particles of the solar wind in the direction of Pluto.

All these theories, astronomers will attempt to verify during the subsequent scans New Horizons with other large objects from the Kuiper belt on the way to his next target – the dwarf planet 2014 MU69, with whom he will meet in January 2019. As suggested by the astronomers, the other bodies in the Kuiper belt should behave in a similar way that should help them to solve the mystery with surprisingly powerful x-ray of the searchlight Pluton.