Polar lights in the vicinity of Saturn’s north pole 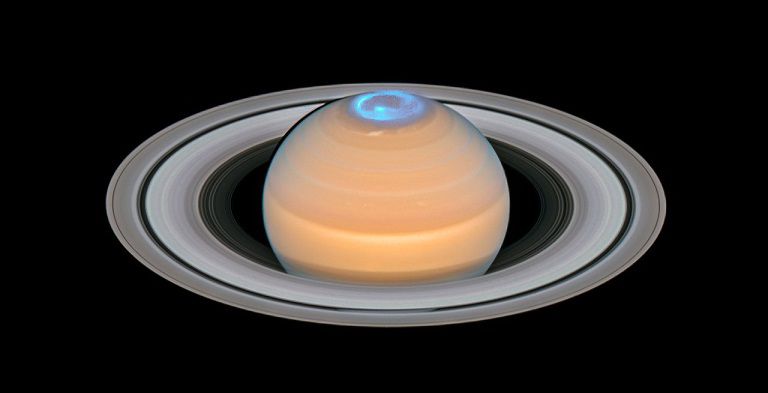 Astronomers with the help of the NASA / ESA Hubble Space Telescope (“Hubble”) made a series of spectacular images of “fluttering” auroras in the vicinity of the north pole of Saturn. These observations were conducted in the ultraviolet range, and the resulting images show a detailed view of the northern aurora on Saturn.

In 2017, for a period of seven months, the Hubble Space Telescope surveyed auroras over the north pole of Saturn with its on-board spectrograph, Space Telescope Imaging Spectrograph. These observations were conducted respectively before and after the summer solstice in the northern hemisphere of Saturn. During this period, the most convenient conditions were provided for observing auroras in the northern hemisphere of the planet with the help of the Hubble.

On Earth, auroras are mainly formed by the action of particles ejected from the surface of the Sun in the composition of the solar wind. When this flow of electrically charged particles comes close to our planet, it interacts with a magnetic field that acts as a giant “shield”. And although this “shield” basically deflects the particles of the solar wind, it can also detain a small part of them. Particles held in the magnetosphere-a region of space around the Earth in which charged particles are affected by a magnetic field-can be accelerated and move along magnetic field lines to the magnetic poles of the planet. There they interact with the oxygen and nitrogen atoms in the upper atmosphere, creating a flickering, colored glow in the sky, observed in the circumpolar regions of the globe.

However, auroras are not unique to the Earth phenomenon. On other planets of the solar system, auroras have also been recorded. Among these planets are four gas giant of the Solar system: Jupiter, Saturn, Uranus and Neptune. Since hydrogen dominates in the atmospheres of these planets – not nitrogen and oxygen, as in the gas shell of the Earth – the auroras can not be seen with their naked eye when they are observed – it is observed in the ultraviolet region in which the picture presented here was taken with the help of ” Hubble. “