As a result of the “shelling” of the asteroid Ryugu with the Hayabusa-2 probe, a ten-meter crater was formed on the celestial body. This fact was confirmed by recently published images.

Now the device will have to sit in this funnel and take samples of the soil. It is curious that the scientists themselves did not expect that the consequences of the explosion would turn out so large-scale.

Recall that on April 4, 2019, a module undocked from the probe, which played the role of a kind of gun. Having flown closer to the surface of Ryugu, it exploded, and the products of the explosion pushed the copper projectile.

The idea was to create a funnel on the asteroid. In May 2019, the probe should sit in this recess and collect samples that were not in contact with open space before the “attack” (in particular, they were not exposed to the action of the solar wind). Such samples should be as close in composition to the substance from which the solar system was once formed. It can be said that the “bombardment” was intended to reveal the secrets of our past, literally not lying on the surface. 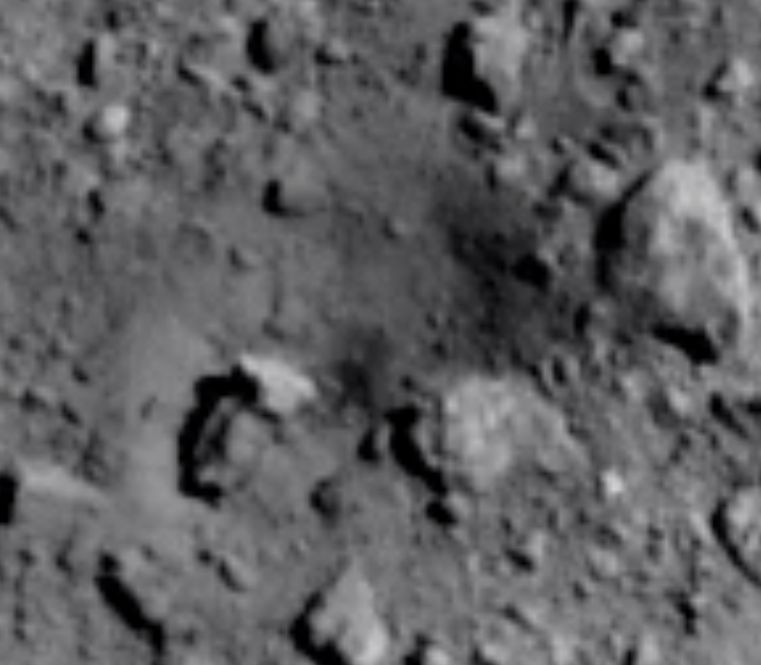 Judging by the pictures, the crater turned out unexpectedly large.
Photo twitter.com/haya2e_jaxa.

Fresh pictures taken by “Hayabusoy-2” from a height of 1,700 meters confirmed the formation of a crater. To the surprise of scientists, it turned out that its diameter was about ten meters.

Astronomers predicted such impressive dimensions only if the ground of the asteroid is loose. However, it is already clear that the surface of Ryugu is hard and rocky (because of this, the researchers even had to reconsider the place of the intended landing). And in such an “uncompromising” breed, only a three-meter funnel was to be formed.

“The surface is covered with boulders, but we have created such a large crater. This may mean that there is a <...> mechanism that we do not know, or something special in Ryugu substance,” said project participant Masahiko Arakawa of the University Kobe in the AFP material.