Proxima b similar to Earth 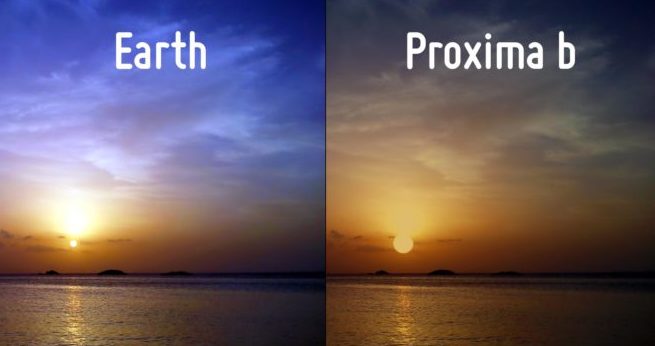 A resident of Switzerland, claim that Proxima b, the nearest exoplanet, must be similar in their properties and size on the Earth and have significant reserves of water, which increases the chances of existence of life on it, according to a paper published in the journal Astronomy Astrophysics.

Our models reproduce very accurately the properties of planets similar to Proximo b and other planets, opened in recent years. Interestingly, our calculations indicate that planets revolving at a small distance from the red dwarfs, are usually small. Their radius varies from 0.5 to 1.5 the radius of Earth, and most likely, they are about equal to Earth in size. Observations in the future will show if we’re right or not, — says Yann Alibert (Alibert Yann) from the University of Bern (Switzerland).

Alibert and his colleague William Benz (William Benz) came to this conclusion by studying the potential properties of two recently discovered small planets – TRAPPIST-1, on opening which, the scientists said in may this year, and Proxima b officially open in August.

Both planets orbit a small red dwarf stars and are assumed to possess the earth’s mass and properties, which led astronomers to think that the planets in these stars, the majority population of the milky Way, are very common and that they, most likely, will be the first worlds where humanity in the future will find extraterrestrial life.

The fact that the Kepler telescope had failed to detect the larger planets of red dwarfs in the last two years, has prompted Alberta and Benz on the idea that such stars are formed mainly earth of the heavenly body, more livable than hot Neptune and other gas giants. They tested whether this by creating a computer model of planetary maternity hospitals have a typical red dwarf.

Their calculations showed that most of the planets, born from a will really have a relatively small mass and resemble in their properties the Earth and other rocky planets. Moreover, what is most interesting, model Alberta and Bentz shows that almost all such planets must have significant water reserves – about 90% of their mass will fall on a solid rock, and 10% of oceans.

Consequently, the chances of that TRAPPIST-1, distant from us only 40 light years, and Proxima b are a kind of counterpart of the Earth, must be very high. On the other hand, as acknowledged by Benz and Alibert, a large number of water can reduce the chances of origin of life, as an excessively high amount of water vapor in the atmosphere can destabilize the climate and produce the strongest greenhouse effect.

However, according to planetary scientists, their calculations confirm that small planets have red dwarf stars are the most probable candidates for the role of a second Land on which life could exist, compared to all the other stars and planets. Accordingly, monitoring should continue and to expand, conclude the authors.