Radio bursts could come from spacecraft? 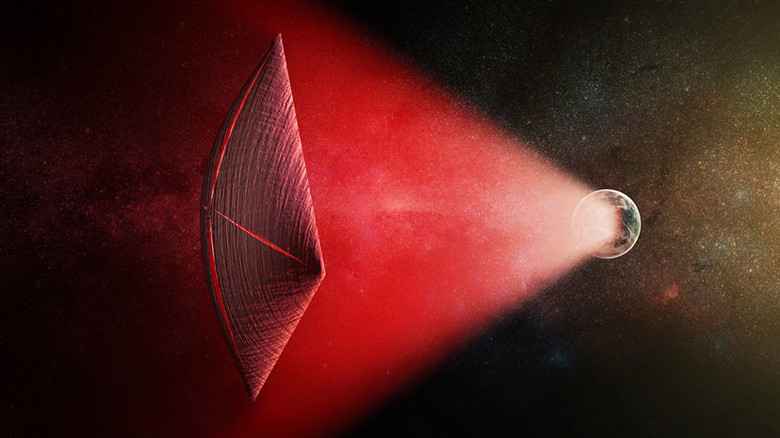 In their opinion, fast radio bursts fixed by telescopes could come from spacecrafts from other galaxies.

A signal from a distant ship?

The first of the so-called rapid radio bursts, which lasted several milliseconds, was discovered in 2007. A total of about 20 such radio pulses are recorded. Their energy is very high, and they emanated from galaxies located billions of light years from the solar system.

Two American scientists from Harvard and the Harvard-Smithsonian Center for Astrophysics have suggested that the source of the signal may be a kind of lighthouses or light sails of spacecraft.

In the scientific community, the suggestion of Avi Loeb and Manasvi Lingam provoked skepticism, which is not surprising. “There is no room for blind faith in science, this is the area of ​​evidence,” Loeb commented on the situation. – To decide what is likely and what is not, ahead of time – means to limit one’s possibilities. It is worth offering ideas, and then judging from the data received. ”

Loeb and Lingam tested a number of their assumptions with calculations. The scientists came to the calculations from two points of view: on the one hand, they needed to show that the amount of energy that the signals talk about will not destroy the potential design that emitted them.

On the other hand, they considered the possibility of building a ship or a device capable of producing a similar radio signal. Calculations have shown that a conventional artificially created source twice as large as the Earth could really accumulate enough energy and give out a radio burst comparable to those recorded by scientists.

“The idea of ​​the work is quite unique (Avi Loeb, however, sometimes publishes similar discussion articles) and apparently made in the framework of Yuri Milner’s Breakthrough Foundation project, which is connected, among other things, with the possibility of sending a ship on a light sail to the nearest star,” Interview candidate of physical and mathematical sciences, senior researcher of the State Astronomical Institute. PC. Shternberg, Moscow State University, popularizer of astronomy Anton Biryukov.

“Still, in the astrophysical environment, the idea that rapid radio bursts are extraterrestrial civilizations is considered marginal in the sense that it is an” extra entity “. While theories suggesting the natural origin of these phenomena, for example neutron stars with strong magnetic fields, are not closed, it’s not very serious to talk about this somehow, “the expert added.

Loeb himself and Lingam, talking about the results of the calculations, called on colleagues to verify the correctness of their assumptions and even suggested a method.

The point is that if the source of radio bursts is created artificially and really represents light sails or a beacon, then the signal should be repeated regularly. In order to confirm or refute the creative assumption of astrophysicists, you need to try to track the frequency of the signal. If the radio bursts are not regular, then, according to the authors of the paper, their assumptions about the source of the impulses can be eliminated altogether.

By the way, the researchers themselves consider the version about the lighthouse, which creates periodic rapid radio bursts, the least probable. According to them, it is difficult to come up with a reason why an alien civilization would build it. Creation of the lighthouse only to express itself, seems to the authors of the work insufficient foundation.

According to Anton Biryukov, obvious flaws in terms of formulas and calculations in the work is not visible.

“But this does not mean that astrophysicists explained the rapid radio bursts of extraterrestrial civilizations. By work, we can only conclude that under certain conditions – not entirely realistic from the point of view of modern terrestrial technologies – engineering structures can produce flares with characteristics, some of which are close to the parameters observed in fast radio bursts.

Even the authors themselves do not pretend that they “explained everything.” Within the framework of their idea, for the observed rate of outbreaks, billions of planets inhabited by intelligent beings are required. Then immediately there arises the obvious question: if there are so many of them, then why have not we found them before? “He noted.

The question of the possibility of establishing contact with a certain extraterrestrial life was actualized in the 1950s in connection with the development of technology and the first flights beyond the terrestrial atmosphere.

Back in 1950, the physicist Enrico Fermi formulated his famous paradox. “Where is everybody?” – this is perhaps the most concise formulation of the Fermi Paradox. The question of where, indeed, other developed civilizations and why the inhabitants of the Earth have never encountered them, gave rise to many explanations. Among them – the inclination of aliens to “home”, the hidden observation of them behind the Earth and the possible absence of intellectually developed life elsewhere in the universe.

The mass interest of both scientists and governments towards this topic was reflected in concrete projects. So, the NASA program called SETI (Search for Extraterrestrial Intelligence), launched in 1959, for a long time was financed from the US budget.

To assess the likelihood of discovering life like a terrestrial, radio astronomer Frank Drake proposed in 1960 a special formula. With its help, you can calculate the likely number of extraterrestrial civilizations that want to meet with humanity, based on several indicators.

For literally several decades, scientists have been able to develop methods of communication at giant distances. The problem of contact with extraterrestrial civilizations was discussed internationally for several decades in a row. However, disappointment grew.

Following the Third Soviet-American SETI conference, held in 1991 at the University of California at Santa Cruz, where the “SETI Paradox” was discussed, it was reported:

At the same time, in the early 1990s, the US government stopped financing the SETI program. In addition, in 1984 the SETI Institute began functioning. The purpose of its creation was to study the indicators that are taken into account in the Drake equation.

In the 1990s, scientists recorded the first exoplanets. In understanding the conditions in which life can exist, they also moved forward. However, as can be seen from profile studies, with rare exceptions such as the work of Avi Loeb and Manasvi Lingam, they mostly talk about determining the conditions for life on newly discovered exoplanets and about trying to find out whether life existed on Mars in the distant past.