Recent “outbursts” have been blamed on “Solar Tornado” 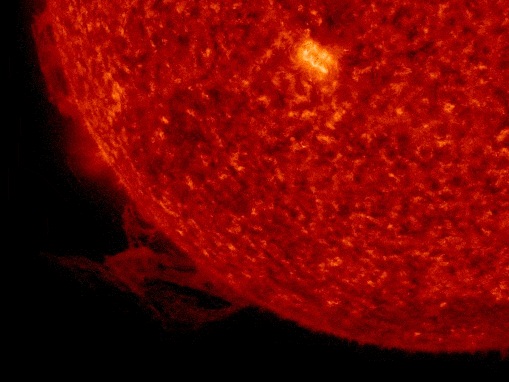 On April 12, two powerful ejections were recorded on the Sun, and now, after a short break, NASA scientists reported that NASA’s Solar Dynamics Observatory observed a high cloud of plasma rotating above the surface of the Sun. The tornado on the Sun was 10 times the size of the Earth.

Unlike tornadoes on Earth, which are formed by the wind, tornadoes on the Sun are driven by magnetism. The solar magnetic fields spiral into a frenzied spiral, dragging clouds of plasma with them. The April 12 Tornado exploded and sent a cloud of magnetized gas into space.

Coronographs aboard the Solar and Heliospheric Observatory (SOHO) have recorded the resulting coronal mass ejection (CME).

This is called a “KVM with a magnetic rope” because a KVM is literally a rope – a spiral twisting of magnetic fields hundreds of thousands of kilometers long. When viewed from the side, these ropes look like a coiled lasso.

NOAA forecasters analyzed the trajectory of this CME. It is not directed towards the Earth