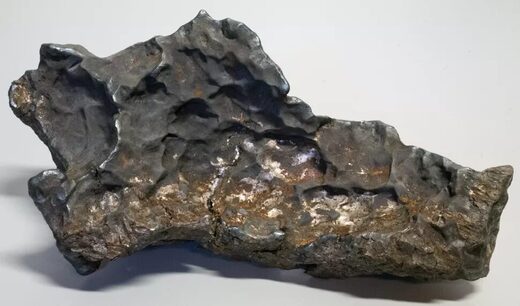 A semi-molten piece of an iron-rich meteorite found in Uppsala, Sweden is part of a meteorite that fell there in November 2020.

The meteorite weighs about 14 kg, according to the Swedish Museum of Natural History. It was once part of a larger space rock, probably weighing more than 9 tons (8.1 metric tons), that created an impressive fireball over Uppsala on November 7.

After this impact, scientists from the Swedish Museum of Natural History calculated the likely landing site and found several small fragments of an iron meteorite near the village of Odalen.

The shards were only about 3 millimeters long, but a tree was also found with a hole in the root area, clearly punched by something heavy. This something that fell from the sky even cracked a large stone lying next to the tree.

Stockholm geologists Andreas Forsberg and Anders Zetterqvist returned to the site and found a piece of meteorite that smashed the boulder. The shard was located about 70 meters from the place where the fragments were found, partially buried in moss.

One side is flattened and cracked, likely from a collision, and the meteorite has circular indentations. These grooves are often found in iron meteorites and are formed when space rock partially melts as it travels through the atmosphere, according to the museum.

“This is the first piece of a recently fallen iron meteorite in our country,” said Dan Holtshtam, curator of the Swedish Museum of Natural History, in a statement. For the first time in 66 years, fragments of a meteorite associated with the observed fireball have been discovered in Sweden.

“Since we now know it is an iron meteorite, we can fine tune the fall models,” Uppsala University astronomer Eric Stempels said in a statement. – It is very likely that the found meteorite is the largest part left after initially about 9 tons of space stone. Some of the smaller pieces were probably left in the area. “