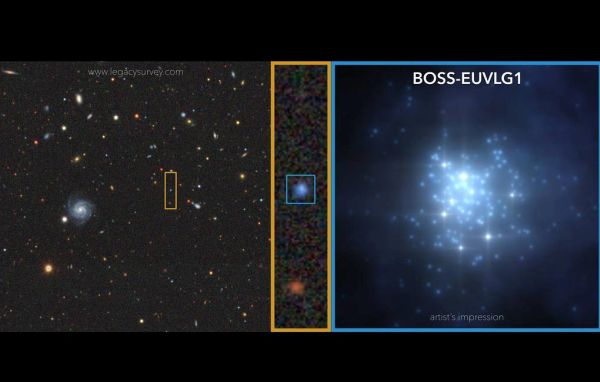 Astronomers have discovered in the constellation Virgo the ancient galaxy BOSS-EUVLG1, a supermassive black hole in which “sleeps”, but the galaxy itself emits record-breaking ultraviolet radiation. The article with the research results was accepted for publication by the scientific journal Monthly Notices of the Royal Astronomical Society Letters.

“New stars in this galaxy are forming at a tremendous rate. This is happening there a thousand times faster than in the Milky Way, despite the thirtyfold difference in size. This is comparable to how quickly stars burst in the brightest infrared galaxies. BOSS-EUVLG1, we also saw their ultraviolet glow, since there is almost no dust in it yet, “said one of the authors of the work, Ismael Perez-Fournon, an employee of the Canary Institute of Astrophysics.

Scientists believe that in the center of presumably all galaxies in the universe is one or even several supermassive black holes. Many objects of this kind – scientists call them quasars – in some nearby galaxies constantly attract and absorb matter, ejecting some of it in the form of jets – very hot, narrow and bright emissions of matter. Quasars are the brightest sources of X-ray, ultraviolet, and other forms of high-energy radiation.

On the other hand, there are many other galaxies, including the Milky Way, in which the supermassive black hole is in a kind of “hibernation” and does not show serious signs of activity. Therefore, such galaxies, if they are located at a very large distance from the Earth, remain invisible to almost all telescopes, except for radio wave and X-ray observatories.

Perez-Fournon and his colleagues discovered an exception to this rule by studying ancient galaxies as part of the BOSS-EUVLG project. The goal of this project is to study the brightest objects that existed in the early eras of the universe and produced a lot of ultraviolet radiation.

Astronomers hope that the “census” and analysis of the properties of such galaxies will help them understand how matter was distributed throughout the universe in the first epochs after the Big Bang. This is extremely important in order to assess how quickly the universe expanded in the first epochs of existence, and to find out the nature of dark matter and dark energy.

Galactic evolution
In total, astronomers have found seven dozen galaxies that produced a lot of ultraviolet and other forms of high energy radiation, existed in the first 1.5-2.5 billion years after the Big Bang. The light from them goes to the Earth from 10 to 12 billion years. Initially, Perez-Fournon and his colleagues believed that active and bright quasars existed at the center of each of them.

When astronomers began to study them in detail with the GTC optical telescope installed in the Canary Islands, they were surprised to find that one of these objects, dubbed BOSS-EUVLG1, did not have an active supermassive black hole.

In particular, in the spectrum of this galaxy, according to the researchers, there is no hint of the existence of even imperceptible quasar emissions. At the same time, it is designed in such a way that all the ultraviolet radiation of the galaxy is generated by the activity of young and large stars, which consist of almost pure hydrogen and helium.

Scientists’ calculations show that in order to maintain such a level of luminosity, many new stars must form in this galaxy every year, the total mass of which is at least a thousand times greater than the sun’s. This makes BOSS-EUVLG1 one of the fastest growing and most active galaxies in the early Universe.

According to Perez-Fournon and his colleagues, this object is the first stage of the formation of large galaxies, which are usually hidden from us by a dense cocoon of dust and gas and therefore are visible only to microwave and infrared telescopes.

Researchers believe that this phase in their existence lasts for a relatively short time by cosmic standards: several million years. During this time, due to the formation and death of a huge number of large stars, large amounts of dust arise, which gradually hide such galaxies from optical telescopes. This explains why astronomers have not previously found BOSS-EUVLG1 analogues.