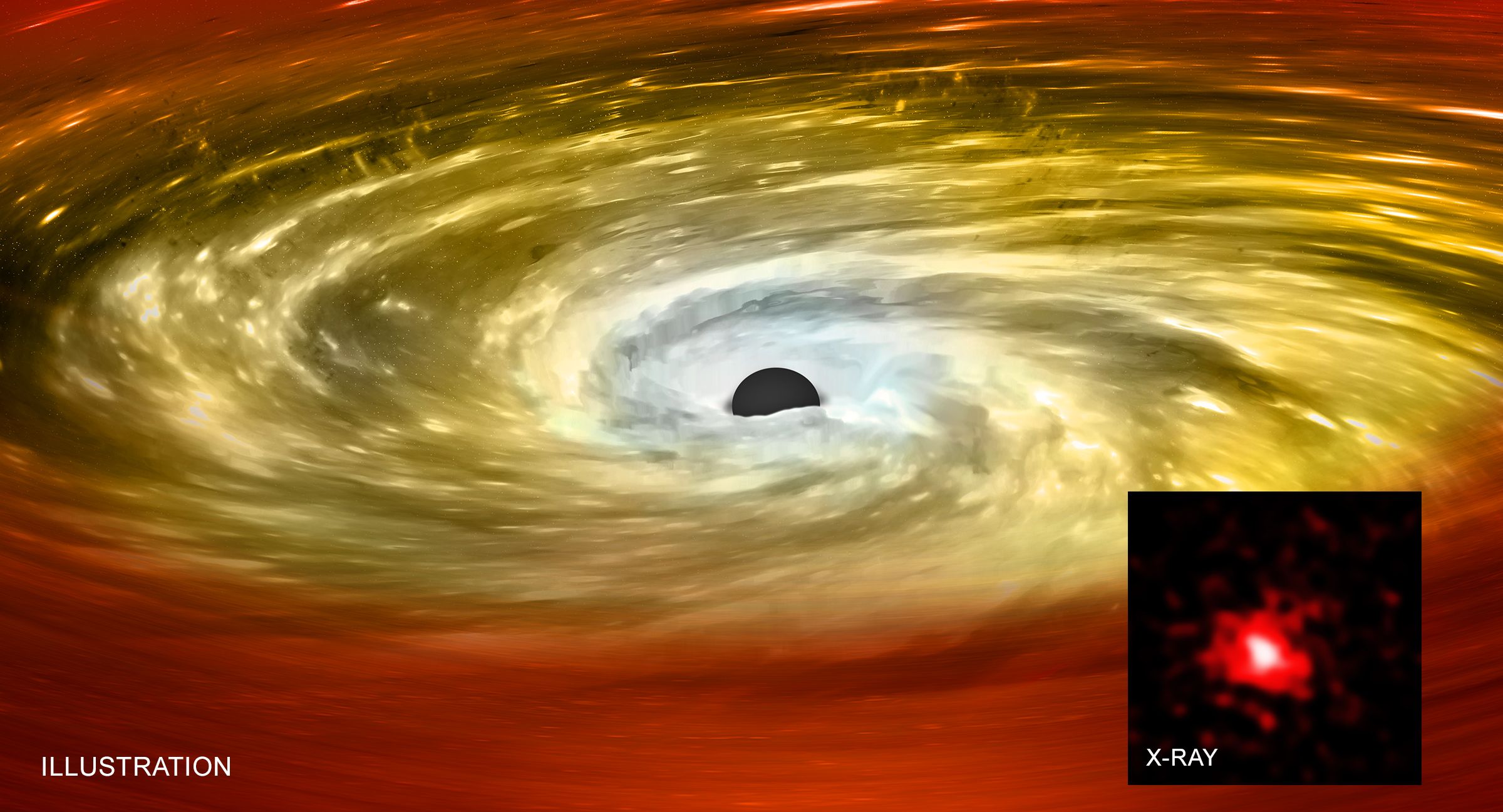 A rare kind of galaxy shows how black holes “strangled” the birth of new stars and used all the unused energy for their own growth.

In 2005, astronomers first discovered the existence of an unusual type of galaxy in the distant early universe. They emerged only three to four billion years after the Big Bang. For observers from the Earth, they appear red because of the abundance of red stars in them.

They were called “red nuggets” and considered the progenitors of giant elliptical galaxies, which, in turn, are often called “red and dead” – they contain only old, low-mass red stars. The “red nuggets” are almost the same mass as elliptical galaxies of medium size, although in size, the first is not more than one fifth of the second. Over time, the “nuggets” collided with other galaxies, but some of them remained alone in the outskirts of the visible universe.

A group of astronomers led by Norbert Werner from the MTA-Eotvos University Lendulet Hot Universe and Astrophysics Research Group in Hungary studied the behavior of two such galaxies – MRK 1216 and PGC 032673. Both are younger than the other observed “red nuggets”. One is 295 million light-years from Earth, the other is 344 million light-years away.

The researchers observed the behavior of the red interstellar gas in the center of each “nugget”. X-ray radiation produced by this gas can reflect the signs of the activity of the nearest black hole in each galaxy. Based on their observations, Werner’s team found that black holes do not allow the gas to cool down and form stars.

“We see that the black holes in these galaxies take everything under their control, which negatively affects the formation of new stars,” says Werner.

Heavy gravitational and magnetic fields of black holes can deflect the matter falling in them and throw it out in the form of jets at a speed close to the speed of light. These jets produce huge amounts of heat, acting on the interstellar gas surrounding the hole, preventing it from cooling and forming into new stars.

The MRK 121, in particular, has a hotter center than the other galaxy. This may mean that the “red nugget” was most recently heated by the jet of its black hole. In PGC 032673, which is slightly older than the first, the gas is 10 times duller, indicating a ruthless ejection of its black hole, throwing the gas to farther distances.

Scientists also recorded radio emissions from both black holes, typical for black holes with jets. X-ray signals from both of them are also one hundred million times lower than the Eddington limit, which is typical for objects emitting jets.

Werner and his team suggest that supermassive black holes increased their size by absorbing hot gas near the center of their galaxies.

Black holes in MRK 1216 and PGC 032673 are two of the most massive such objects known to science. Measuring the speed of the stars near the center of each of the “red nuggets”, the researchers found that the mass of each of their black holes about five billion times the mass of the sun.

In addition, the mass of each of these black holes is a small percentage of the total mass of stars near the center of the galaxy. Black holes of more typical galaxies weigh 10 times less.

“They not only do not allow the formation of new stars, but they can also use some of this galactic material for their own food,” said co-author of the study Massimo Gaspari of Princeton University.