Reduced the amount of dark matter in the Universe 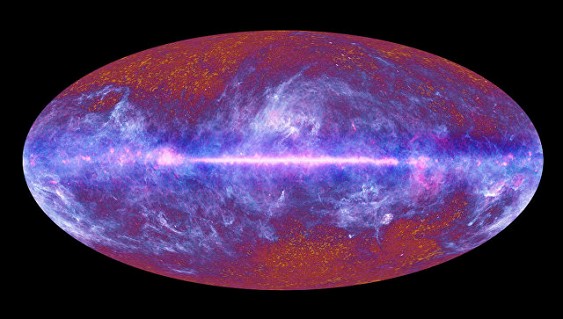 The amount of dark matter in the Universe has decreased by approximately 2-5%, which may explain the differences in meaning of some important cosmological parameters at the time of the Big Bang and today, according to the Russian cosmologists.

Let’s imagine that dark matter consists of several components, as usual. One component consists of an unstable particle whose lifetime is quite large: in the era of the formation of hydrogen through hundreds of thousands of years after the Big Bang, they are still there in the Universe, and today they are gone, decayed into neutrinos or hypothetical relativistic particles. Then the amount of dark matter in the past and today will be different, — said Dmitry Gorbunov of the Moscow physical-technical Institute, quoted in a press-service of the University.

Dark matter — a hypothetical substance that manifests itself only through gravitational interaction with galaxies, introducing distortion in their movement. Dark matter particles do not interact with any of the types of electromagnetic radiation, and therefore can not be recorded during direct observations. The share of dark matter accounts for about 26% of the mass of the Universe, while ordinary matter makes up only about 4.8% of its mass — all the rest is no less mysterious dark energy.

Monitoring of distribution of dark matter in the closest and most distant corners of the universe, carried out using ground-based telescopes and probe Planck, recently unveiled a strange thing – it turned out that the rate of expansion of the Universe, and some properties of the echo of the Big Bang in the distant past and today are markedly different. For example, the galaxies fly away from each other much faster than it follows from the results of the analysis of the CMB.

Gorbunov and his colleagues found a possible reason for this.

A year ago, one of the authors of the article, the academician Igor Tkachev, of the Institute of nuclear physics Russian Academy of Sciences in Moscow, formulated the theory of so-called decaying dark matter (DDM), which, in contrast to the generally accepted theory of cold dark matter (CDM), some or all of its particles are unstable. These particles, as suggested by Tkachev and his colleagues should break up very often, but in appreciable quantity in order to produce deviations between the young and modern Universe.

In his new work Tkachev, hunchbacks, and their colleague Anton Chudaikin tried to calculate how much dark matter is supposed to decay using data collected by Planck and other observatories, have studied the CMB and the first galaxies in the Universe.
As shown by their calculations, the decay of dark matter may indeed explain why the results of observations of this substance with Planck does not correspond to the observations of nearest to us galaxy clusters.

Interestingly, this requires the collapse of a relatively small number of dark matter – from 2.5 to 5% of its total mass, whose number does not depend on what fundamental properties must have the universe. Now, as the scientists explain, the whole matter broke up, and the rest dark matter, stable in nature behaves as described by the theory of CDM. On the other hand, it is also possible that she continues to disintegrate.

This means that in the Universe today is 5% less dark matter than it was in the era of the formation of the first molecules of hydrogen and helium after the birth of the Universe. Now we can not say how quickly broke this fragile part, it is possible that dark matter continues to decay and now, although this is another much more complex model, concludes Tkachev.