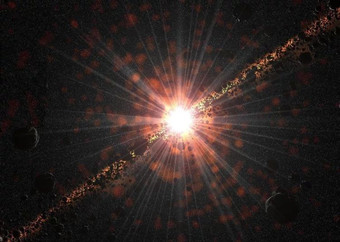 As you know, our vast universe was born about 14.5 billion years ago as a result of the Big Bang. Despite the fact that we already know a lot about how our universe was created, we still do not understand what exactly caused this enormous explosion in power. In order to try to answer this question, the researchers decided to analyze the mechanisms that could cause such an incredibly powerful explosion that gave rise to everything, including you and me.

What triggered the Big Bang?
What was the beginning of our universe with you? Well, there are several different points of view regarding the origin of our universe. Some researchers believe that the Big Bang could result from a series of smaller explosions, while opponents of this theory claim that there was literally nothing before it; the third ones prove that before the birth of our Universe there were at least two more Universes that collided with each other and released as a result of their collision a large amount of energy, which gave rise to our universe. When scientists announced the discovery of so-called relict radiation in July 1965, the discovery was truly sensational, laying the foundation for the development of cosmology and the theory of the birth of the Universe with its subsequent expansion and cooling.

According to the phys.org portal, the researchers managed to find some critical criteria that could cause the primary flame to generate its own turbulence, after which it spontaneously accelerate and smoothly go into detonation. Karim Ahmed, an assistant professor of mechanics and aerospace engineering at the University of South Florida, believes that the birth of our universe was similar to a supernova explosion, with the only difference being that the magnitude of these cosmic events is immeasurably different.

When the parent star gradually burns out in the process of dying, at the final stage of its cosmic death, it explodes, leaving behind only a shell consisting of a mixture of various gases and matter. A similar process, although much smaller, was managed by the team of Karim Ahmed in the laboratory. The key to the success of the experiment was the application of a certain combination of turbulence and a passively burning flame. The powerful explosion that occurred at the end of the process could become similar to the Big Bang that spawned our Universe.

Researchers believe that their proposed Big Bang mechanism may help better understand the age of the universe. In addition, experience could help for more efficient operation of hypersonic engines and with modernized power generation.