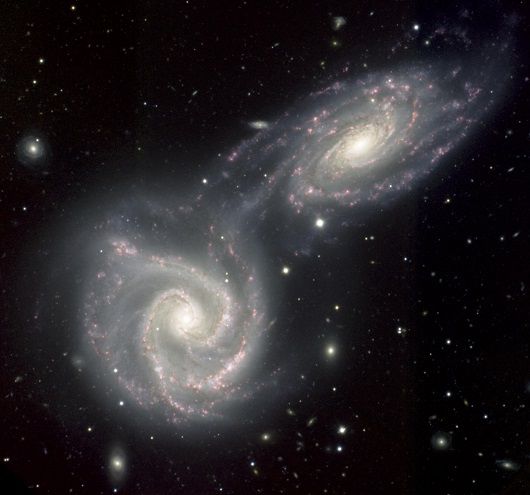 The theory of Einstein’s gravity can be reconsidered, since researchers from St. Andrews University, Scotland, discovered a giant ring of galaxies moving away from us at a much higher rate than expected.

This ring, about 10 million light-years in diameter, consisting of small galaxies, is expanding rapidly, like a miniature version of the Big Bang. The team believes that the neighboring Andromeda galaxy once passed near our Milky Way galaxy, which led to the gravitational expulsion of several small galaxies.

In that case, if Einstein’s theory of gravity were correct, our galaxy would never have come close to the Andromeda galaxy so closely to throw out satellite galaxies at such a high speed, the authors of the new study, led by Indranil Banik of St. Andrews University, explain.

“This ring distribution of galaxies is very unusual. These small galaxies are like raindrops that fly apart from the surface of a rotating umbrella. I found that for randomly distributed galaxies the probability of being in such a configuration is about 1 to 640. I tracked their origin to one dynamic cosmic event that occurred at a time when the age of the universe was only half of its current age, “Banik said. .

“Einstein’s paradigm always requires the attraction of ideas about dark matter. Such a high speed of satellite-galaxies requires 60 times more mass than the mass of all the stars of the Milky Way and Andromeda galaxies. However, the friction of their hypothetical giant halos of dark matter would lead to the unification of these two galaxies, and not to a distance of 2.5 million light years. Thus, this ring of galaxies is a serious challenge to the modern gravitational paradigm. “