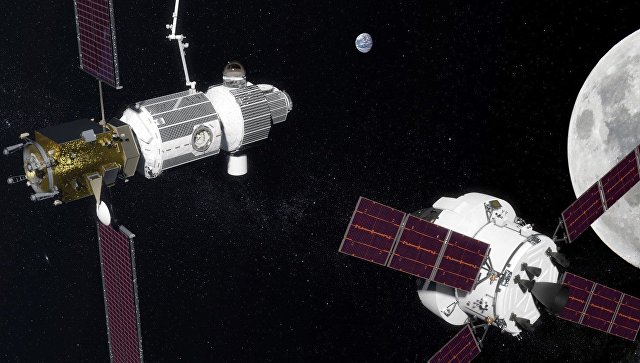 Space agencies of Russia and the United States agreed to create a new space station Deep Space Gateway in the orbit of the moon, said the head of Roskosmos Igor Komarov at the International Congress of Astronautics – 2017, which takes place in Australia.

“We agreed that we will jointly participate in the project for the creation of a new international near-moon station Deep Space Gateway.” At the first stage, we will build an orbital part with a further perspective of using the used technologies on the surface of the Moon and subsequently Mars. “The first modules can be deduced in 2024-2026 year, “said Komarov.

According to the head of Roskosmos, the parties have already discussed the possible contribution to the creation of the new station. Thus, Russia can create from one to three modules and standards of a unified docking mechanism for all ships that will dock to the Deep Space Gateway, and also suggests using the super-heavy-class rocket that is now being built to launch structures into the near-moon orbit.

The specific technological and financial contribution of all participants of the Deep Space Gateway creation will be discussed at the next stage of the talks, Komarov noted. According to him, now a joint statement on intentions to work on the project of a near-moon station has been signed, but the agreement itself requires serious consideration at the state level. In this regard, the Federal Space Program for 2016-2025 will be revised.

“We hope to present an interesting and important program, prove its need and provide financing, we have the understanding and hope to partially find external sources of financing for this program, but the main task is state funding,” Roscosmos said.

The need for unification

Komarov noted that at least five world space agencies are working on creating their own ships and systems, therefore, in order to avoid problems in the future in technical cooperation, some of the standards should be unified.

Some key standards, in particular – the docking station, will be formed on the basis of Russian developments, he added.

“Taking into account the number of connections that we conducted and the experience that we have, there are no equal Russia in this direction, so this standard will be as close to Russia as possible, and a standard of life support systems will be developed on the basis of Russian developments,” said head of Roskosmos.

Krikalev for his part explained that the docking standards will contain uniform requirements for the dimensions of the parts of the docking assembly.

“The most elaborate version is the gateway module, and the dimensions of the housing module elements can also be unified.As for the carriers, the new elements can be displayed both on American SLS media and at the Russian” Proto “or” Angara “, he said.

The creation of the Deep Space Gateway will open new opportunities for using the capacities of the Russian industry, and RSC Energia’s achievements can play a significant role here, Komarov concluded.