Russia will send to the moon 12 astronauts 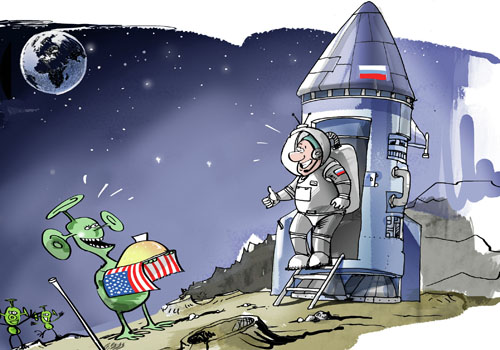 In Russia, are heavy booster “Angara-А5В” and the ship is specially designed to send people to the moon. Today, experts revealed some details of the future mission.

So, they said that on the surface of the natural satellite of the Earth can go up to 12 astronauts. Lunar probe that will explore Selena, I plan to plant in 2024, and to build a permanent base by 2030.

The lunar base will be used for research and production of valuable minerals, as well as for military purposes (the latter, however, thought foreign media).

At the initial stage lunar base will be managed 2-4 people, then their number will increase to 10-12.

“With four crew members and the duration of the expedition 30 days minimum habitable germanyin such a base is 20 cubic meters. For activity of the crew infrastructure must be on the lunar surface”, – quotes the newspaper “Izvestia” the words of the head of the press service of the Central research Institute of mechanical engineering Olga Zharova.

In TsNIIMash newspaper said that the blueprints of lunar construction techniques have already been created. “Plans for the manufacture of test specimens of such construction equipment no. But developed their computer 3D-models”, – said Zharov.

It also became known that for the power supply of the station is likely to respond subsurface reactor, which will be located near one of the poles of the moon (most likely South).

All facilities will be underground to protect astronauts from harmful space radiation.

However, the exact place for construction of a lunar base is not selected. Originally in Roscosmos said that the Rover “Luna-25” will be sent to study the terrain and find the best locations for future base in 2024. Landing people on the surface is planned for 2030.

Later, it was reported that the Federal space program (BFC) for 2016-2025 struck all the work for manned flights to the moon. From the list of the paid development of the PCF were taken of the lunar landing complex and a lunar orbital station, lunar base and lunar spacesuit and other projects related to the development of the satellite.

Deputy Prime Minister Dmitry Rogozin, who oversees the government space industry, has repeatedly talked about the need for exploration of the moon. At the same time in August of 2015, Rogozin agreed with the inappropriateness of allocating large sums on the preparation of space missions to the moon and Mars. In his opinion, with the current state budget and space ambitions will undermine the economic interests of the country.