Russian astronomers have discovered a mysterious light signal from space 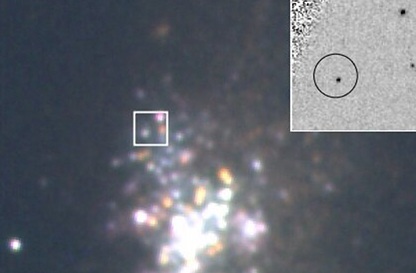 Russian astronomers have discovered one of the brightest sources of X-rays, located in the galaxy UGC 6456, which is 14.8 million light-years distant from Earth.

Researchers analyzed archival images of the UGC 6456 ULX from the Chandra X-ray Observatory and the Hubble Space Telescope. The source changed the luminosity by more than two orders of magnitude with a peak value of 17 to 10 to the 39th degree of erg per second in the range of 0.3-8 kiloelectronvolts. The absolute magnitude of the object exceeds -7.6, making it one of the brightest ULX in the optical range at the moment.

The nature of the high variability in the optical and x-ray ranges remains unclear. However, the brightness fluctuations have an amplitude similar to that observed in NGC 7793 P13 – another source of x-ray radiation, which includes a neutron star.

Scientists also found a correlation between luminosity in the optical and x-ray ranges. A possible explanation is that X-rays generate visible light at the outer edges of the accretion disk, from which a strong stellar wind emits – a stream of matter blown into interstellar space.

ULX are point sources of x-rays that are brighter than a million suns at all wavelengths. They are less bright than active galactic nuclei, but more stable than any known stellar process.