Russian scientists found helium anomalies in the birth of the Universe 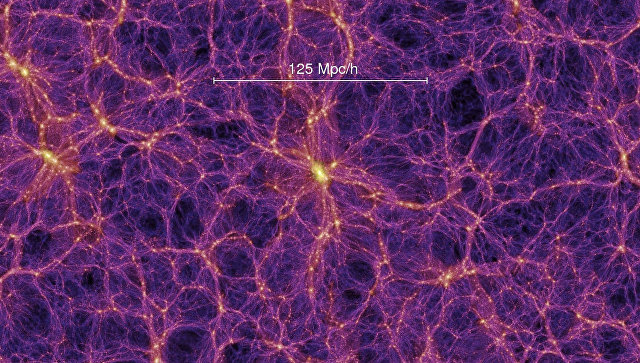 Astrophysics from MIPT and the RAS Institute of space research found that the helium atoms has played a key role in the birth of the first galaxies in the early Universe and the formation of the global cosmic web in which we now live, according to a paper published in the journal MNRAS.

The birth process of galaxies starts with a quick compression of dark matter, and then the area begins to drain the gas. We believe that in this stream of gas particles of different masses will move with unequal speeds. Helium — the heavier particle, then it will settle faster hydrogen evolving in the gravitational field of the galaxy, — said Sergey Sazonov of the space research Institute, quoted in the press service of MIPT.

After the Big Bang, the Universe existed only three elements — hydrogen, helium and trace amounts of lithium. However, after 300 million years, when the first stars began to appear heavier elements born in the course of thermonuclear reactions in the depths of light. The rate of formation of these elements and their current number in the Universe depend on how much helium and lithium originally contained universe, which scientists for decades trying to determine their concentration.

It tells Sazonov, today many astrophysicists and cosmologists believe that all the elements were distributed by the primary gas soup of the Universe evenly and that all the first galaxies contain about the same proportion of hydrogen, helium and lithium.

Russian scientists have shown that, most likely, it was not so and that the first galaxies could contain orders of magnitude more helium than they reveal mathematical and computer models of the early Universe, adding to these computer models are one of the most important physical phenomena, as moving gases of different masses in different conditions.

Using this model, scientists have created a miniature Universe in virtual reality and we followed that inside her grew a giant cloud of gas, of which there are the first protogalaxies and galaxies protokolunu. These calculations showed that the helium will move towards the center of these clouds is significantly faster than hydrogen, which should lead to its accumulation in the vicinity of future galaxies.

The rate of this accumulation depends actually on two parameters: the initial mass of clouds and the temperature, which prevailed in the early Universe in the first few hundred million years after the Big Bang.

If it was high enough, and the weight of protogalactic – on the contrary, is low, then the first galaxies of the universe had to have significantly more helium for a few tenths of a percent than we used to think, which should greatly affect the nature of their formation, the properties of their stars, and the whole process of evolution of the Universe.

All of these calculations, as I hope Sazonov and his colleagues, will help cosmologists to find out how the universe looked in its first days of life, when they obtained more accurate empirical data on concentrations in the first galaxies of the universe. As scientists believe, to validate their ideas and search of excess helium is better suited dwarf galaxy, which may actually be the first galaxies of the Universe extant.