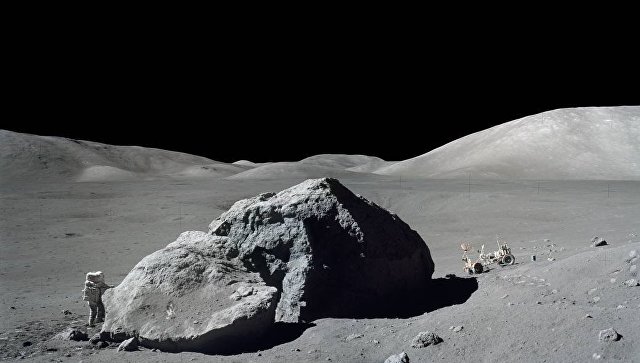 Samples of the ancient rocks of the Moon from the Apollo-15 helped scientists find out that the Earth’s companion lost the magnetic field relatively recently, about a billion years ago, according to an article published in the journal Science Advances.

“The problem in the study of the lunar magnetic field is that the depths of the moon cooled about 3 billion years ago, because of which new rocks containing traces of the planet’s magnetic field simply ceased to form.We have found that the vitreous material gluing some samples Rocks from the Apollo-15, stores in itself traces of the magnetic field of much later eras, “says Benjamin Weiss of the Massachusetts Institute of Technology (USA).

American astronauts during the missions of the “Apollo” brought to Earth samples of the lunar rock, which carried the traces of the magnetic field, which is deprived of the modern moon. On the other hand, the mass and dimensions of the Moon are too small for the emergence of a “magnetic dynamo” – the streams of molten metal that are the source of the magnetic field, in particular, on the Earth.

The question arises: where did this field come from, and why did it last more than a billion years after the formation of the planet? Trying to solve this riddle, scientists formulated several different ideas, relying on the chemical, isotopic and mineral composition of rocks from the “Apollo”.

For example, in 2011, planetologists suggested that metal flows could occur in the core of the moon as a result of the fact that its core was “shaken up” after colliding with a large asteroid. Other groups of scientists said that the traces of the magnetic field in the samples from the Moon are an anomaly and that the moon did not possess a strong magnetic field in the past.

Weiss and his colleagues found new traces of the magnetic field of the Moon, which confirmed its existence and pointed to its unusual history, studying samples of rocks collected in the crater of the Dune in the Sea of ​​Rain and brought to Earth by the Apollo-15 expedition in 1971.

These fragments of rocks, as Weiss says, are fragments of the ancient crust and mantle of the Moon, which in the distant past have been “catapulted” from its bowels by the fall of a large meteorite. Some of these rocks melted, forming a special vitreous material, the threads and drops of which cemented the surviving cobblestones of rocks.

Mysteries and answers of the “Apollo”

In the past, according to scientists, their colleagues paid attention only to the rocks themselves and ignored the “glass”, believing that it was formed in an era when the moon’s magnetic field no longer existed.

Weiss’s team found out that this was not so, discovering the many small “magnetized” grains of iron minerals inside this glass that helped them find out if the magnetic shield of the Moon was about 2.5-1 billion years ago, when, as has been shown by measurements of isotopes Argon inside these rocks, formed the crater of the Dune.

Similar results show that the magnetic “dynamo” in the bowels of the moon lived at least a billion years longer than previously believed by scientists, and calls into question the theory of its temporary “revival” as a result of meteoric impacts or the heating up of subsoil under the influence of the Earth’s gravity.

According to Weiss and his colleagues, the metal continued to “boil” in the core of the Moon because it contained two types of materials whose density changed in a special way with increasing or decreasing temperatures and pressures, which allowed them to constantly “swap” even after Of how the companion of the Earth has almost completely cooled down.

Now, astronomers from MIT are studying other samples from the Apollo, hoping to find younger particles of glass that would help them understand when this lava cycle in its core ceased, and why today the Moon does not have a magnetic field.