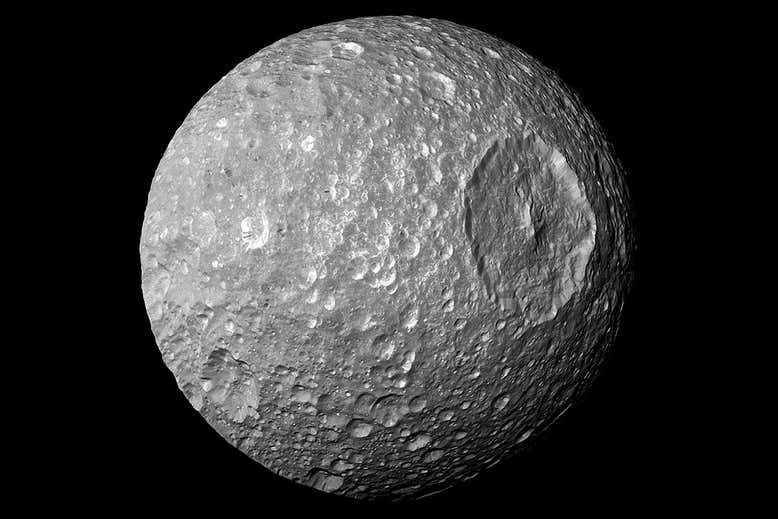 One of Saturn’s many moons, Mimas has a diameter of 396 kilometers and is the twentieth largest moon in the solar system, as well as the smallest known cosmic body that is rounded due to its own gravity.

Looking at images of the satellite taken by spacecraft, the scientists say there is no hint of liquid water. However, simulations by the Southwestern Research Institute in Colorado suggest that the treasured liquid is hiding deep under the Mimas ice sheet.

Measurements taken by the Cassini space probe in 2014 showed that Mimas wobbles as it spins. This hints that something strange is happening under the 28-kilometer layer of ice on the surface of the cosmic body. The researchers then speculated that there might be water under the moon’s icy shell, and have been trying to figure out if that’s possible ever since.

Getting to work, the lead author of the new study, Alyssa Roden, wanted to prove that Mimas cannot have an ocean, since there are no external signs of this (like cracks on the surface). Instead, the researcher came to the exact opposite conclusion.

Rhoden and her colleagues modeled how the moon’s interior stretches and heats up under Saturn’s gravity and how this affects the outer icy shell. The study showed that the heat would be enough to keep an entire ocean of liquid water under the ice—so deep that the icy surface of Mimas wouldn’t crack.

Cassini’s measurements of the physical properties of Mimas are explained either by a non-hydrostatic core or by a subglacial liquid ocean. A combination of tidal heating caused by Saturn’s gravity may have played a role in the development of the ocean, as well as Mimas’s libration and the eccentricity of its orbit.

“The ocean inside Mimas would be amazing given the lack of comparable geological activity to that seen on other oceanic moons such as Europa and Enceladus. Thus, this study is important for understanding the abundance and identification of cosmic bodies with oceans.