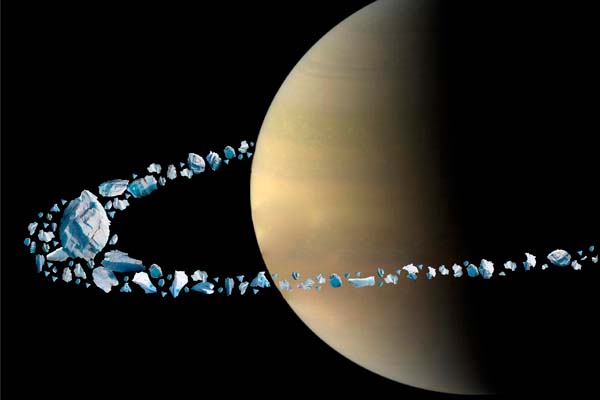 Using data from the Cassini spacecraft and modeling, astronomers have concluded that Saturn’s rings formed about 160 million years ago as a result of the tidal destruction of the moon, which received the unofficial designation Pupa. The study is presented in the journal Science.

The impetus for the departure from the orbit of the Chrysalis and the formation of rings was the destabilization of the orbit of Titan under the influence of the gravitational interactions of the system with Neptune, which, in addition to these events, is also responsible for the large tilt of the axis of rotation of Saturn at 26.7 degrees.

The formation of Saturn’s rings as a result of the destruction of the icy satellite. Credit: Burkhard Militzer/UC Berkeley and NASA
In size, the Pupa was comparable to Iapetus, the third largest satellite of Saturn after Titan and Rhea. At the moment of destruction, 99% of its substance was absorbed by the gas giant, and the rest formed rings.