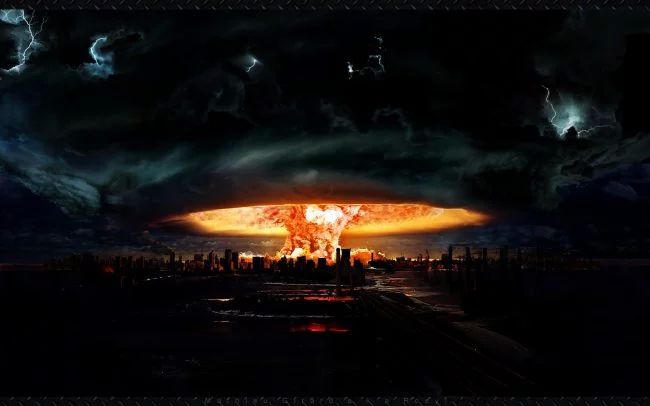 There are now more than 15,000 nuclear warheads on Earth – that’s enough to blow everything to the dogs. Even more than enough. But how many nuclear explosions will be required to destroy the enemy? How many nuclear warheads can the aggressor country throw on the enemy before the consequences of the nuclear winter return to it? A new study was conducted to find answers to these questions, but you will not like the results.

From a paper published last week in the journal Safety, it follows that no country should have more than 100 nuclear warheads. This is the maximum number, according to Joshua Pierce, a professor at the Michigan Technological University, and David Denkenberger, an assistant professor at the University of Tennessee. All that over this number, will attack the aggressor country in the form of ecological, socioeconomic and agricultural destruction, as well as seriously subside the local life – even if the enemy does not respond with its own nuclear strike. At the same time, scientists believe that hundreds of warheads are still sufficient for nuclear deterrence, reducing the risk of war (and collisions), and, as a consequence, preventing a catastrophic nuclear winter.

To clean up the nuclear arsenal and reduce the number of nuclear stockpiles to 100 warheads is an excellent proposal. Sotochka will look great on the negotiating table. But on closer examination this figure is still quite arbitrary. Modern nuclear weapons, even if used in limited quantities, are capable of destroying entire cities and causing catastrophic environmental consequences. A nuclear war, be it 100 or 1,000 nuclear strikes, will become a terrible event, from the consequences of which the entire planet will shake. Ideally, the safest, most rational and humane number of nuclear weapons will be zero.

Is it necessary to reduce nuclear stockpiles?

Currently, the US has 6,550 nuclear warheads; in Russia – 7010. Add UK stocks, France, Israel, Pakistan, India, China and North Korea, and the number of common stocks of close to 15 000. But if the proposal Pierce and Denkenbergera become a reality, this number falls to less than 900. It will become less on 94%. Less nuclear weapons – less chance of a collision, scientists say, as well as less money needed to service all these warheads. They themselves also believe that “none of these seven countries is rational to maintain arms stocks of more than 100 units, given the enormous potential impact it can have on its own citizens.”

The whole point of the new work is to define “a pragmatic nuclear limit in which direct physical negative consequences of nuclear weapons will be contrary to national interests.” In other words, to understand when your nuclear strike will bite your ass, even if the enemy does not respond.

“Studies that considered scenarios of nuclear war before, were focused primarily on a full-scale war of Russia against the US and asked questions like” will humanity survive? “Says Pierce. “Studies of small regional wars have focused on environmental impacts. This is the first study devoted to a one-sided attack and its consequences, especially for the food chain, for the aggressor, suggesting the best scenario. ”

By “best script” Pearce describes purely hypothetical (and completely unrealistic) situation in which, apart from the fact that the nation aggressor does not face retaliatory launch, it is not plagued by terrorist attacks, massive civil unrest, minimal fallout and a myriad of other things, which can appear against the backdrop of a sudden nuclear attack. The authors tried to determine the maximum number of nuclear strikes that can be dropped on the enemy before the nuclear winter comes and will lead to the collapse of trade, industry and agriculture.

Everybody knows that nuclear winter is scary. Here’s what the authors write:

“Nuclear winter is a potential serious long-term global climatic cooling effect that can appear after large-scale fire storms caused by detonation of a certain number of nuclear warheads. The nuclear war will burn out extensive forest areas, arable land, fossil fuel reserves, cities and industrial centers. These fires form a thick layer of smoke in the Earth’s atmosphere, dramatically reducing the amount of sunlight reaching the surface of the Earth and triggering “nuclear twilight.”

In addition to abnormally low temperatures, a severely damaged ozone layer will no longer block harmful ultraviolet rays. Global food production will drastically decline. The food chains and industry will cease to function fully, and in some cases disappear.

To determine when nuclear explosions begin to pose a problem for the aggressor country, scientists calculated the consequences of 7,000, 1,000 and 100 nuclear warheads dropped on a separate country. Each warhead was arbitrarily assigned a capacity of 15 kilotons. The authors calculated how much material will burn in each city and how much smoke will be released into the atmosphere. Climate change models were used to predict the impact on agriculture and the world food supply chain.

According to one hypothetical scenario, if the US dropped 100 nuclear warheads into the most densely populated cities in China, the initial explosions would kill about 30 million people. “Regional nuclear war” will provoke nuclear autumn, cause a temperature drop of 1 degree and a 10-20% decrease in world food production. Hunger will kill many people in China, but American citizens for the most part will remain unscathed. If the US drops 1,000 to 7,000 warheads on China, the story will be completely different: 140,000 million people in China and 5 million US residents will die.

“How destructive will be the use of even a modest share of our nuclear arsenal for US stability, we are shocked,” says Pierce. “We thought that America has so much land and so much wealth that any scenarios of nuclear bombing will leave us untouched. We were wrong. The number of dead Americans who die after our bombardment is amazing – it is much higher than the number of deaths from terrorist attacks to date. ”

Pierce believes that analysis because of optimistic and conservative estimates generally underestimates the number of US deaths in these scenarios. In reality, it will be much higher.

“For example, we assumed that anyone who died of hunger, immediately cut off from food. But it’s hard to believe that the American elite will sacrifice their children for the common good of the nation. I think many people will die from internal unrest caused by a lack of calories. ”

In addition to radical and unrealistic assumptions, this study also suffers from another serious limitation related to the size and power of modern nuclear weapons. This study assumes the use of 15-kiloton bombs, which in fact makes little sense. This is the power of the bombs dropped on Hiroshima and Nagasaki. Modern bombs are much bigger and stronger. Most modern bombs are 25 times more powerful than those used in the Second World War, from 100 to 500 kilotons. The largest bomb in the world – 5 megatons, and the largest in the US – 1.4 megatons. The difference is colossal.

The same conclusion was reached by scientists a year ago in a study published in Environment Magazine. Adam Liska and his colleagues from the University of Nebraska-Lincoln have shown that “limited strikes,” such as those proposed by Pierce and Denkenberger, can still cause both local and global climatic consequences. In addition, they found that the United States, Russia and China have weapons that can cause nuclear fall after the application of five bombs. Therefore, “100 strokes” as a magic number lose their meaning in the context of modern weapons.

“The most sensitive parameter in this calculation is the size of the bombs, which varies from 25 to 5000 kilotons,” says Liska. “Today only the biggest bombs are considered.”

Despite this, it is fair to say that the reduction in nuclear stockpiles will continue to be a reasonable step.

“It is irrational to invest billions in maintaining an excess of weapons that destabilizes our own country in case of use,” Pierce says. “This logic works for everyone. Other countries are in a worse situation, because they are poorer, like Russia, or do not have enough of their own land, like Israel. ”

Perhaps North Korea will abandon nuclear weapons, but it is not known whether other nations will follow it. Probably no. Maybe we will partially get rid of this dangerous cargo, but complete disposal from it is impossible or even undesirable. This conclusion was made by the authors of the study.