Schiaparelli crashed because of a bug in the software 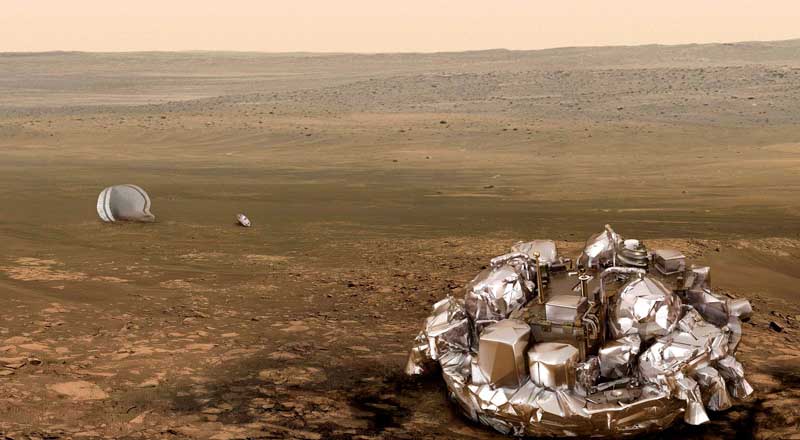 Scientist Jorge Vago, working with the Russian-European ExoMars project in 2016, suggested that the space module, Schiaparelli, crashed while landing on Mars, could crash because of software bugs.

Vago explained that Schiaparelli threw the protective housing and the parachute ahead of time. In addition, the engines for braking module worked for only three seconds, but had to operate at least half a minute.

While reducing the spacecraft’s computer had misjudged the distance to the surface, so Schiaparelli even included scientific instruments, however, they received no data, added Vago.

The head of ESA operations, Andrea Accomazzo, in turn, suggested that the information from the sensors responsible for the evaluation of the distance from the surface could be processed incorrectly.

The problem with software is much better from the point of view of further development of the mission, because it can be overcome with the help of computer simulations. If the problem arose directly in hardware module, to solve the problem would be more difficult, experts say.

Schiaparelli lander landed on Mars on 19 October. Then it was reported that at the time of the landing module from him stopped coming signal. Later, ESA reported that the signal from the module arrives, but no telemetry data. On 20 October, scientists said that there is still a chance that the device will be in contact.

The data is partially analyzed and confirm that the input (the module in the atmosphere of Mars) and a descent (to the planet’s surface) were conducted in accordance with the plans. An emergency situation has arisen after the release of the heat shield and parachute. Apparently, it happened sooner than expected, but the analysis is not yet completed, – stated in the message.

The program ExoMars 2016 is a joint project of the European space Agency and Roscosmos. Its main purpose is to answer the question whether there was ever life on Mars. Hence the prefix Exo – in the name of the program: exobiology happens to be, or astrobiology, the study of the origin evolution and distribution of life on other planets in the Universe.

ExoMars-2016 includes two missions. The first was launched on 14 March 2016 launch from Baikonur of the carrier rocket proton-M with the spacecraft within the orbital module TGO (Trace Gas Orbiter) and a demonstration of the descent module Schiaparelli.

Module TGO will search for traces of methane and other gases in the atmosphere of Mars, which could indicate active biological and geological processes on the planet. In turn Schiaparelli test a number of technologies that provide a controlled descent and landing on Mars.

Module Schiaparelli, named after the Italian astronomer Giovanni Schiaparelli, worked out a scheme of planting for the second part of the Russian-European program, scheduled for 2020. In the framework of the Mars will go a Russian landing platform and the new European Mars Rover.

At this stage the key task will be drilling and analysis of Martian soil. According to one hypothesis, at a depth of several meters could remain traces of organic life. In this module, the TGO is planned to be used until 2022 for transmitting signals from the European Rover to the Ground.