Scientists: a new cycle of solar activity has begun 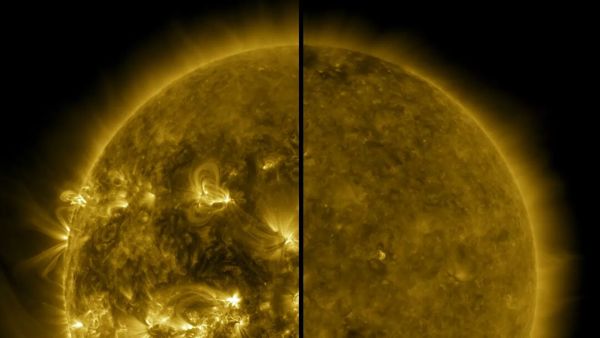 Experts from NASA and the US Meteorological Agency NOAA have agreed to mark December 2019 as the start of a new solar cycle. This was reported on the official NASA website.

The cycles of solar activity were discovered by the Swiss astronomer Rudolf Wolf in 1843. He established that their duration is about 11 years, and traced the history of solar cycling to 1749. Astronomers consider this year to be the beginning of the cycle under the conditional number one. Now, according to experts, the 25th cycle has begun.

The activity of the Sun manifests itself in the form of a large number of spots – zones with powerful magnetic fields – X-ray flares and plasma emissions in the solar corona. Scientists have noticed that at the beginning of each new cycle, spots appear closer to the poles of the Sun, and eventually sink to the equator.

Like a conveyor belt, for several years, huge meridional plasma flows carry local magnetic fields from the equator to the poles, creating a global magnetic field of the Sun. At the poles, the plasma descends into the interior of the Sun, where it moves back to the equator. Each such turnover takes about 11 years. This is the physical basis of the solar cycle.

According to astronomical observations, since 2018 solar activity began to fall. In February 2019, the level of short-wave radiation was already so low that it was no longer detected by ground-based instruments. Scientists’ calculations showed that the minimum fell on December 2019, and now the growth has begun.

“Over the past eight months, the activity of the Sun has gradually increased, which indicates that we have entered the 25th solar cycle. It, according to calculations, promises to be the same in strength as the previous, 24th. Maximum solar activity is expected in July In 2025, the peak will reach 115 sunspots, “the statement reads.

That is, according to experts, the next peak of solar activity is unlikely to exceed the maximum of the 24th cycle, which was already noticeably lower than the previous ones. This is reassuring because even though our planet is protected from the effects of events on the Sun by the magnetic field, the most powerful flares cause geomagnetic storms. The latter have an impact on the well-being of people, can lead to malfunctions of ground-based communication devices and spacecraft equipment.

Space weather forecasts are also critical to space projects, such as the Artemis program to land astronauts on the moon in 2024. So NASA researchers are working on predictive models to learn how to predict space weather in the same way that meteorologists predict the weather on Earth.

“There is no bad weather, there is bad preparation,” says Jake Bleacher, chief scientist at NASA’s Office of Space Research and Operations (Jake Bleacher) on the agency’s website. “Space weather is what it is, our task is to prepare.”

For their research, NASA’s forecasting team uses monthly reports from the World Data Center for Sunspot Index and Long-Term Solar Observations at the Royal Belgian Observatory in Brussels, which tracks and locates sunspots.

“We keep a detailed record of tiny sunspots indicating the beginning of a new cycle,” says Frédéric Clette, director of the center and one of the forecasting team members. “These are miniature forerunners of the coming giant solar fireworks. Only by tracking the general trend over many months, we can define the tipping point between the two cycles. “