Scientists are studying the atmosphere of Venus 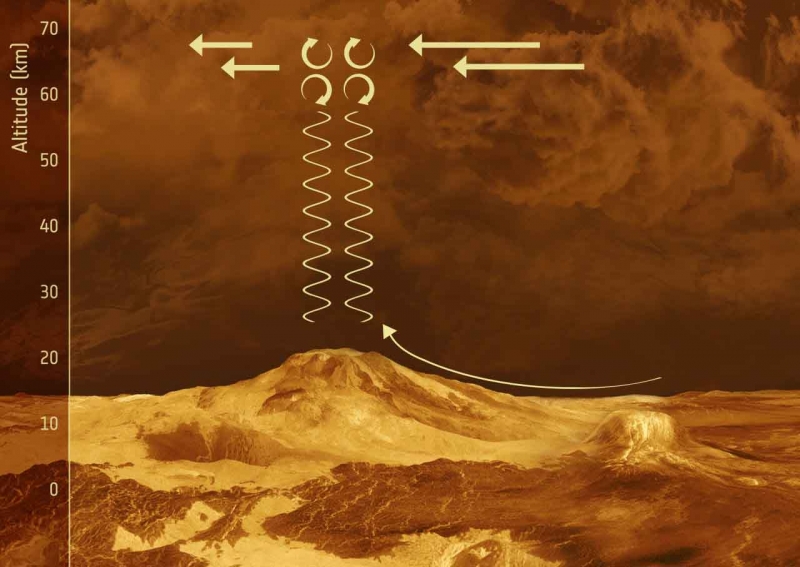 Using archival data of observations carried out at the time with the help of the spacecraft of the European space Agency’s Venus Express, scientists were able to show that the circulation of gases in the atmosphere of Venus has a direct influence the shape of the surface under the layer of clouds.

In the new work, a group of researchers led by Jean Lupa Berto from the laboratory LATMOS (Laboratoire Atmosphères, Milieux, Observations Spatiales), France, by analyzing archival data collected using the now decommissioned the Venus Express probe discovered that in the air over one area of the surface of Venus contains more water vapor than over other portions of the surface of the planet.

This “wet” region is located almost exactly above the mountain chain with peaks reaching a height of 4500 meters, which is called the Land of Aphrodite. This phenomenon appears to be associated with the rise of the atmospheric air rich in water from the lower layers of the atmosphere over the mountains of the Land of Aphrodite, in connection with which the researchers dubbed this phenomenon the “fountain of Aphrodite”. So why all this water is concentrated in one place?

In the study, scientists found out that the sudden appearance of large quantities of water in this part of the atmosphere of Venus is due to a phenomenon known as gravitational waves, however, do not have almost anything to do with the same phenomenon predicted by the General theory of relativity.

Gravitational waves, which are here in question represent density waves, which are formed in ambient air when air masses encounter the obstacle in the form of, for example, high mountains. According to the proposed working versions of these gravitational waves on Venus are distributed from the top down, with increasing amplitude, and at high altitude they subside, thus reducing the wind speed in the upper atmosphere.