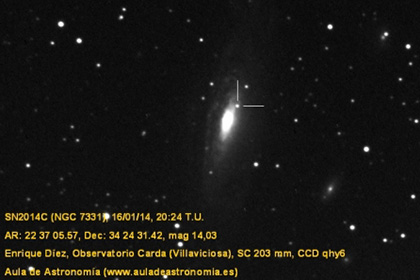 Astrophysics from northwestern University in the US offered a possible explanation for the unusual supernova SN 2014C, which does not fit into modern classification. According to their hypothesis, the outbreak was caused by the fact that the deceased star, the predecessor was part of the dual system.

Towards the end of his life of a star, as a rule, the exhaust contained therein, hydrogen (H) into helium and other heavier elements. If a supermassive star before the explosion fully developed H, a supernova, in which she will turn, refers to the first type. In rare cases, hydrogen may still be present in the star during the outbreak. This supernova belongs to the second type.

Astronomers observing SN 2014C, remote from the Earth at 36-46 million light years, discovered that she shifted from one type to another. This transformation was impossible to explain with existing models, so researchers carefully examined the remaining after the outbreak of a gas cloud. It turned out that for hundreds of years before its explosion, the star has already started to release large amounts of hydrogen.

Scientists believe that these emissions were due to the fact that the precursor of the supernova was part of a dual system, that is, had the star-companion. However, another explanation is possible, namely that the cause of hydrogen evolution was unstable nuclear reaction.