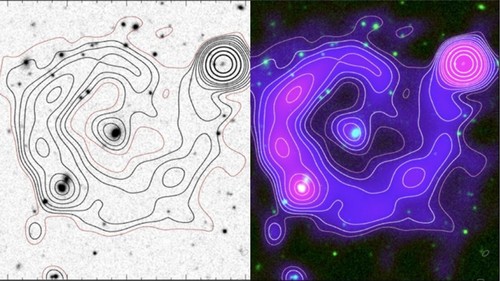 Scientists have discovered another bizarre, gigantic and unexplained circle-shaped radio structure in outer space, a discovery that contributes to “exciting times in astronomy,” according to a new study.

The bubble is the latest example of the Strange Radio Circle (DRC), a name for a type of spectral ring that debuted in a 2020 paper led by University of Western Sydney astrophysicist Ray Norris. Norris and his colleagues discovered four such huge circles, eerily glowing in faint radio waves far beyond our galaxy.

Now scientists led by Berbel Koribalski, a researcher at Australia’s CSIRO National Telescope Center, have discovered a fifth ORC, which appears to extend to about a million light years away.

The structure, called ORC J0102-2450, also looks like it has an elliptical galaxy at its center, a feature it shares with the two ORCs detected by Norris’ group. Koribalski and co-authors, including Norris, said the presence of the galaxies is “hardly a coincidence” and could help explain the origin of these ghost rings, according to their forthcoming study in Monthly Notices of the Royal Astronomical Society Letters, available on the arXiv preprints server.

For decades, ORCs have gone undetected because they are very dim, but new and modern radio telescopes such as Australia’s Square Kilometre Array Pathfinder (ASKAP) are sensitive enough to spot the huge bubbles.

“Because ASKAP can observe an area of 30 square degrees — a very large area — it is an excellent survey instrument, and the data collected will lead to many new discoveries,” Koribalski said in an e-mail. “We usually observe one area of 30 square degrees for ~10 hours (if possible), then repeat these observations several times to increase the sensitivity of the field. The higher the sensitivity, the more radio sources we detect.”

Koribalski and her colleagues combined eight ASKAP observations from August 2019 to December 2020 to see the newest member of the ORC family.

Because ORCs are so faint, it is difficult to determine exactly how far away they are from Earth, making it difficult to estimate their size. However, the pattern of galaxies appearing at the center of the ORC, now observed in three of five cases, may provide a measure of distance. For example, the galaxy at the center of the recently discovered ORC is about three billion light-years away, suggesting that the circle spans a space of about 980,000 light-years.

This distant galaxy could also be the source of a giant bubble, the study says. Some galaxies are surrounded by long radio-bright lobes formed by jets from their galactic nuclei that eject energetic gas tens of thousands of light-years into intergalactic space. Koribalski and her colleagues suggest that ORC J0102-2450 may be one of these petals when viewed from Earth, as it dims rapidly after the jets turn off.

The team also suggests that a “giant blast wave in the central galaxy” that creates a “spherical shell of radio emission” could be the ORC’s progenitor, the study says. One possible trigger for such a large-scale spherical shock wave could be the merger of two supermassive black holes during a galactic collision.