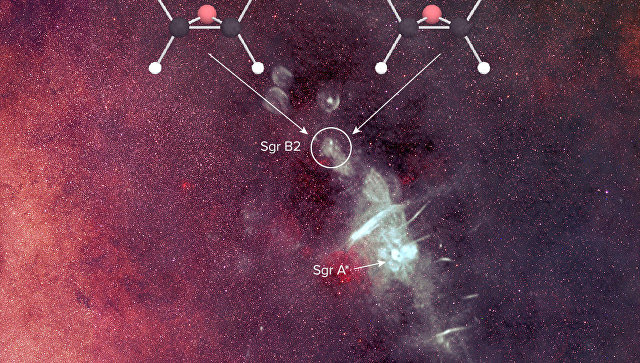 Scientists first discovered the molecules of one of the “blocks of life”, of propylene oxide that can be “twisted” to the left or right side, in the center of our Galaxy that brings us closer to unlocking the mysteries of birth, life, says an article published in the journal Science.

“The next step is to determine how much of this cloud of “right” and “left” molecules. Opening of chiral molecules in space, we now have the opportunity to explore how and where they formed, before they fall into the stuff of comets and asteroids. This, in turn, allows us to look for the answer to the question of what role this feature played in the origin of life and why all members of life on Earth are “lefties,” said Brett McGuire (Brett McGuire) from the National radio astronomy Observatory, USA.

One of the main mysteries of the origin of life on Earth is why all existing living beings are a kind of chemical “left-handed”. It appears that cells use only those amino acids that are twisted to the left, in the synthesis of protein molecules and other components of cells. With sugars, the situation is reversed – life uses only the “right” carbohydrates, twisted in the opposite direction.

The first attempts to reveal the nature of this phenomenon showed that the reactions of “inorganic” synthesis produce an equal number of “left” and “right” amino acids that testified in favor of the same concentration in primary ocean of the Earth. The opening of the “space” of sugars and amino acids in meteorites and comets did not give an answer to this question, as the concentration of “right” and “left” substances were the same.

As McGuire says, to date, scientists have not found complex organic molecules outside the Solar system which would possess a chirality – the ability to spin light “the left” or “right.” This prevented the search of the roots of “left-handedness” of life and modeling what looked like the Solar system in the first moments of its existence.

McGuire and his colleagues found that these molecules are still present in the interstellar medium, observing the center of the galaxy with the help of American radio telescope in green Bank and the Australian cousin of the parks.

Looking at the cold gas cloud Sgr B2, located close to the supermassive black hole Sgr A*, scientists have found traces of propylene oxide (С3Н6О) is a compound of oxygen and Uglevodorody propane, whose molecules can be rotated in two different directions. From this substance can be formed a number of amino acids and sugars.

Detection of chiral molecules in the gas cloud Verhalten means that complex chemical reactions and compounds can occur and be formed even at very low temperatures above absolute zero by only 5 degrees Kelvin.

Says McGuire, such substances occur in the depths of space in two stages – first the simpler molecules arise as a result of collision the most basic compounds – methane, ammonia, and oxygen. Then these molecules land on the surface of grains of ice and dust, where they experience more complex chemical transformation, and then vaporize, saturating the gas clouds like Sgr B2 future “blocks of life”.

His study, as scientists hope, will help us to understand why all amino acids are turned “left” and sugar “to the right”.