Scientists first observed how a star absorbs a planet 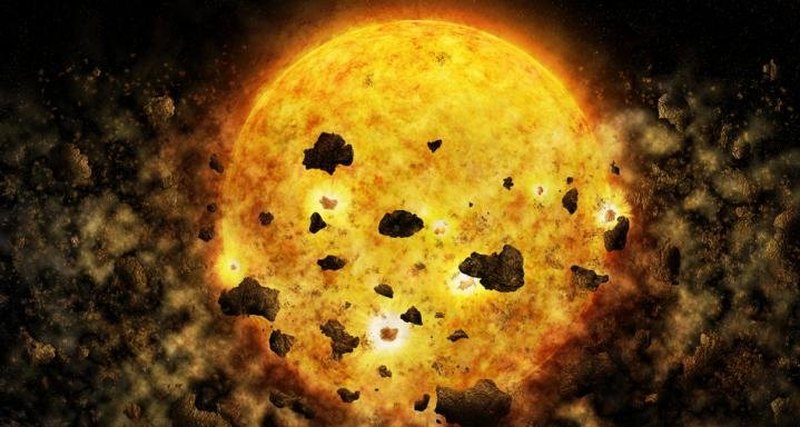 A strange flickering star from the molecular cloud, in which thousands of new suns are born, turned out to be sliced ​​iron. Scientists believe that it absorbed metal, which was part of a young planet or planetesimals. If this assumption is true, then this is the first case of direct observation of how a star devours a planet.

Between the constellations of Taurus and Auriga, 450 million light-years from the Earth, there is a cluster of molecular clouds, in which new stars constantly light up. This area is the closest to the Earth “star cradle”, so astronomers often turn to it to observe the stars at the earliest stages of development. Around the young stars, usually rotates the disk of matter – gas and larger particles, from fine dust to entire planets. The disk dissipates during the first 5-10 million years of the star’s existence, therefore it serves as a good measure of its “youth”.

Astronomer Hans Moritz Guenther (Hans Moritz Guenther) is studying the youngest stars that have not yet lost the substance of the disc. For one of these stars, Gunter and his colleagues have been watching for several decades: the young star RW Aur A in the molecular cloud between the constellations of Taurus and Auriga is interesting because it constantly changes luminosity every few years. So, the star faded in 2011 for as much as six months, flared up again, in 2014 again became less bright and returned to its usual luminosity only in November 2016.

Astronomers offered different versions explaining such fluctuations: perhaps the light of the star is blocked by gas flows passing between it and the Earth on the outer side of the disk, and maybe the processes proceeding closer to the star itself are to blame. In January 2017, scientists registered a new reduction in the luminosity of RW Aur A, sent a X-ray telescope “Chandra” lens to it and observed it for 14 hours. Analysis of the radiation of the star showed, first, that it is much hotter than expected; Secondly, scientists estimated the density of the disk surrounding the star, and it turned out to be quite large. Thirdly, in the substance of the disc was a lot of iron – not as much as in the core of the Earth, but about the same as that contained in a large satellite of the solar system.

Signatures of iron are often present in the nuclei of stars, but the hotter the star, the less iron; for a very hot RW Aur A iron in its spectrum is about 10 times greater than it should be. Scientists offer two explanations: either the iron dust accumulated in the inner part of the gas-dust disk has fallen recently, or the star has absorbed a part of the matter of planetesimals – the “germs” of future planets that form inside its disk.

To know for sure, where a star has so much iron, scientists should watch it for at least a year. If there is still a lot of metal, astronomers will be able to say with certainty that its source is quite large – like a planet or planetesimal, slowly absorbed by a star. If the iron lines in the spectrum of the star become smaller, then the source of the metal was small.

“We spend tremendous resources on learning how the planets around other people’s stars form; of course, it is very important for us to know how they can be destroyed by their own stars, and what factors determine whether the planet will be destroyed or remain in orbit, “explains Gunther.