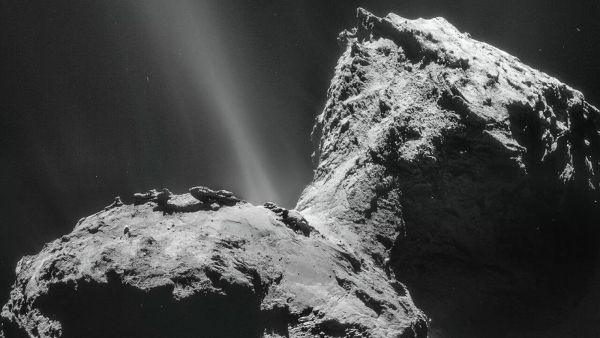 The spectrograph of the Rosetta interplanetary station has revealed a unique ultraviolet glow around comet 67P / Churyumov – Gerasimenko. Scientists believe that the nature of this phenomenon is the same as that of terrestrial auroras. The research results are published in the journal Nature Astronomy.

Scientists at the Southwest Research Institute (SwRI) in the United States, who analyze data from the Rosetta mission’s ALICE ultraviolet spectrograph, have discovered unusual auroral emissions, such as aurora borealis, outside the visible spectrum.

On Earth, auroras form when charged solar particles are directed toward the poles by our planet’s magnetic field. There, they collide with atoms and molecules in the Earth’s atmosphere, creating multi-colored shimmering curtains in the sky of polar latitudes.

Auroras are known for many stars, planets and smaller bodies, including those that do not have their own magnetic field, such as the Churyumov-Gerasimenko comet. But the nature of the appearance of luminescence is the same everywhere.

Around the comet, the glow is created by charged particles of the solar wind, which interact with the gas that surrounds the comet’s nucleus, consisting of dust and ice. A special ion and electron sensor (IES) of the Rosetta spectrograph made it possible to detect the glow in the shell of the comet’s gas – a coma.

“We originally thought that the ultraviolet radiation from comet 67P was ‘daylight,’ a process caused by the interaction of solar photons with cometary gas,” said Dr. Joel Parker, head of ALICE, in a press release. amazed when they discovered that ultraviolet radiation is the aurora caused not by photons, but by electrons in the solar wind, which split water and other molecules in a coma and accelerate in the environment surrounding the comet. ”

“I’ve been studying Earth’s auroras for five decades,” says Jim Burch, project manager for the IES, “but finding auroras around 67P, where there is no magnetic field, is amazing.”

Researchers have built a physical model of the phenomenon, taking into account the data obtained by other devices “Rosetta”.

“We didn’t have to rely on just a single instrument dataset,” says first author Marina Galand of Imperial College London, who focused on integrating measurements. “We pulled together a large dataset from multiple instruments to better understand This allowed us to unambiguously determine how the ultraviolet atomic emissions of comet 67P / Churyumov – Gerasimenko are formed and reveal their auroral nature. ”

Scientists continue to analyze data from Rosetta, which completed its mission in 2016, and hope for new discoveries.