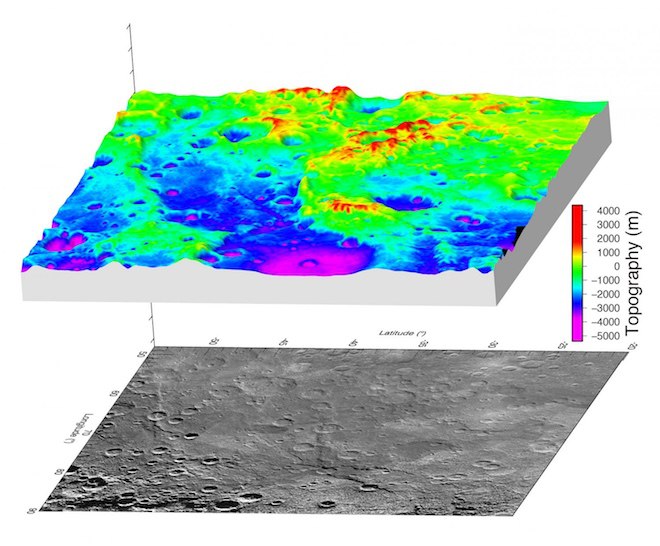 Scientists opened the huge valley on Mercury which can be the first evidence of loss of stability an external silicate envelope of the planet in response to global compression.

The new form of a relief on the planet, next to the Sun, was found thanks to the topographic map of the Southern hemisphere of Mercury. This card of high-res is made of the stereoimages received by the spacecraft of NASA “Messenger”.

According to authors of a research, the most probable explanation of existence of the huge valley on Mercury is deformation of a litosphere — bark and the top cloak — as a result of global compression of the planet. The litosphere of Earth is broken into a set of tectonic plates, but the litosphere of Mercury consists only of one. Cooling of a solid envelope of Mercury caused compression and a bend of the single plate. Where the contraction forces are most big, breeds of bark creep up while the bottom of valley caves in down.

“There are examples of deflections of a litosphere on Earth with participation of both oceanic, and continental plates, but this valley can be the first evidence of similar process on Mercury” — the leading author of a research Thomas Waters from Smithsonian institute of the USA reported.

Width of the valley makes about 400 kilometers, and its bottom on whole 3 kilometers is lower than the environmental area. It stretches more than for 1000 km, occupying the pool Rembrandt, one of the largest and youngest shock pools on Mercury.
The valley is limited to two larger waste ledges (English fault scarp) — thresholds on the surface of the planet where one party of a break moved upright in relation to another. Compression of Mercury made valley borders so larger that they actually became plumb rocks. The bottom of valley is much lower than the area surrounding mountain waste ledges. According to scientists it means that it fell on the same mechanism on which ledges were formed.
“Unlike the Great rift valley in East Africa, the merkuriansky valley was formed not owing to a divergence of earth’s plates because of tectonic processes, and owing to global compression of the single plate of the planet — Waters explained. — If the litosphere deflection because of compression of a plate is quite predictable, then its result became the real surprise. Nobody expected to see on Mercury the huge valley including the largest waste ledge and one of the most larger shock pools”.