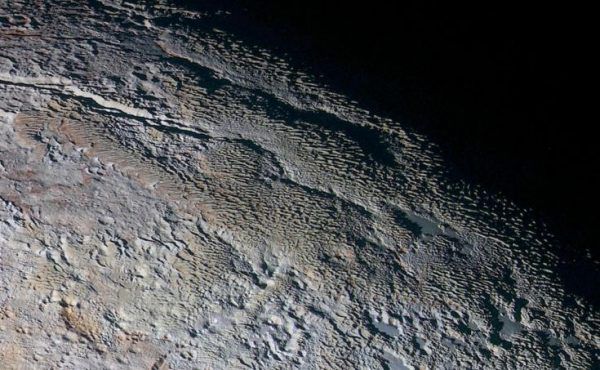 Using the model similar to what meteorologists use for forecasting of weather on Earth, and also modeling physics of the evaporating ice, professor of department of sciences about Earth and space and engineering of School of engineering of Lassond of the York university, Canada, John Moores found proofs that the snow and ice formations before observed only on Earth exist also on Pluto.

Kalgaspora, or “the repenting snow” which are created by an erosion represent bowl-shaped deepenings at the edges of which the high peaks sometimes reaching several meters in height are located.

This innovative research executed together with researchers from NASA and John Hopkins’s University, the USA specifies that these ice formations can exist as well on other planets on which surface similar conditions are supported.

“Identification of crests of the Ridge Tartar located on the surface of Pluto as the kalgaspor demonstrates that presence of the atmosphere is necessary for forming of these structures and it can explain why we don’t see kalgaspor on others, the satellites of planets or dwarf planets deprived of air, – explains Murs. – However distinction in the conditions of forming leads to the fact that on Pluto these educations are much larger, than on Earth – so, their height can reach 500 meters here. Such height of these peaks in the plutonianskikh conditions follows from our model”.