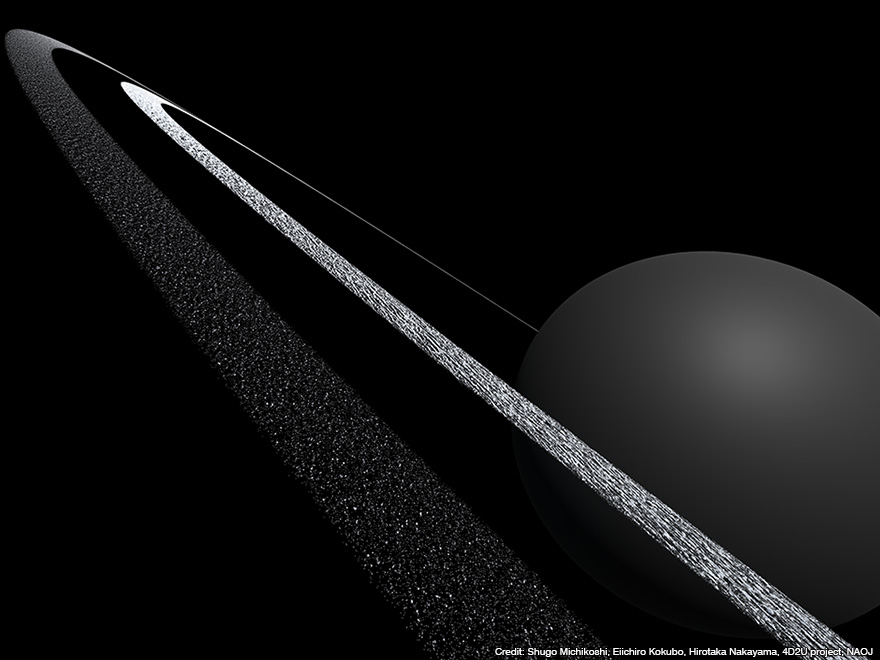 Japanese astronomers Shugo Michikoshi and Eiichiro Kokubo created on the ATERUI supercomputer a three-dimensional model of the ring system around Khariklo, the largest asteroid between the large asteroid rings of the solar system.

With a diameter of about 250 kilometers, with a surface area slightly higher than the area of ​​Chukotka, the asteroid Khariklo is the smallest celestial body of the Solar System, which has rings (according to calculations, two). Together with other centaurs, he flies in an orbit located beyond the orbit of Jupiter, but within the orbit of Neptune.

To create a model of motion of rings, scientists mathematically described the motion of 345 million particles, of which rings consist, their collisions and gravitational attraction to each other, to Hariklo and to other objects. The computing power of the supercomputer was enough for these calculations only because the system of Hariklo rings is relatively small; To the fact that in a similar way to calculate the motion of the rings of Saturn, scientists have no resources yet.

Rings were found in all four giant planets of the Solar System – Saturn, Jupiter, Uranus, Neptune, and also Hariklo. According to some reports, there are also rings around Saturn’s moon Ray and asteroid-centaur Chiron.

For the rings to be stable, their density should be less than the density of the Hariklo itself. When this condition is met, self-gravitational wakes must exist in the inner, denser Khariklo ring, caused by the mutual gravitational action of the ring particles. Autogravitational vortices on Khariklo should destroy the ring sooner or later – according to the calculations of Mishikoshi and Kokubo, in just 100 years. This figure is much less than what the colleagues of Japanese scientists offered earlier, therefore, in order to explain the fact that the Hariklo rings are still in place and quite stable, the scientists proposed two hypotheses.

Autogravitational vortices exist in the rings of Jupiter and Uranus, and the rings of these planets are not destroyed only by the action of large shepherd satellites. The first hypothesis of Mishikoshi and Kokubo suggests that Khariklo also has such a shepherd companion, which holds the inner ring. The second hypothesis is that, in fact, the material particles that make up the inner ring are smaller than is considered. The inner ring, consisting of particles smaller than a centimeter in diameter, can survive a hundred million years, and if the particles are more than a meter (as expected in the simulation), the inner ring of Hariklo can not be more than a hundred years old.

From which of the hypotheses is true, the answer to the question of where the asteroid rings originated depends. If the inner ring of Hariklo is really not older than a century, then the probability that it appeared as a result of a collision of an asteroid with another cosmic body is extremely small, since such collisions are rare. In this case, the formation of a ring is more likely as a result of the destruction of the satellite or from the material ejected from the surface of the asteroid.