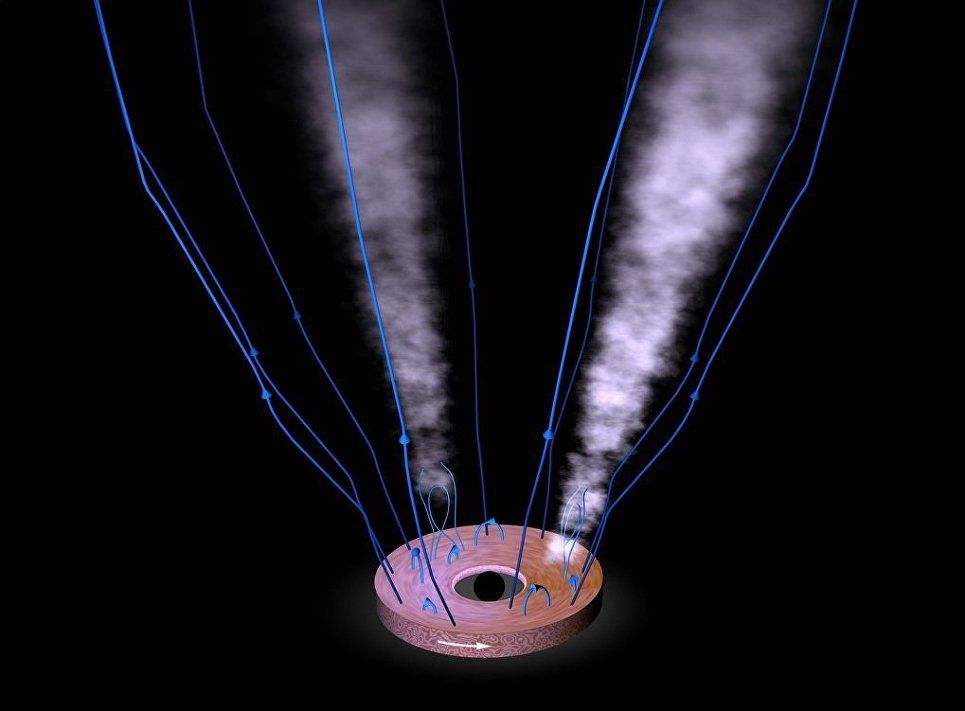 Scientists at the Radio Astronomy Institute in Bonn, led by Christian Fendt, believe that the movement of emissions with a superluminal velocity of a number of giant black holes is a kind of “dance”, their rocking from side to side. The reason for such conclusions was the behavior of the black hole accretion disk surface, similar to the Sun. It includes a glowing gas with constantly occurring in it various magnetic processes, including the addition of lines of force and flares. Hence it follows that the movement and form of the emissions is controlled by the global magnetic field of this disk.

The center of almost any galaxy is the place of existence of supermassive black holes. The mass of such black holes is several million times greater than the solar one, in contrast to the mass of black holes that arose from the collapse of stars. Periodically absorbing stars, gas and celestial bodies, some part of the whole “selected” energy, black holes emit it in the form of heated plasma beams, in other words – jets, whose speed is close to the speed of light.

The results of the first observations of the behavior of such emissions revealed the impossible facts. Matter in various parts of the plasma beams could dramatically change the speed of its movement, and in some cases even exceed the speed of light. This discovery led scientists into a stupor, why the origin and movement of such beams of matter occurs, because it is directly at variance with the laws of physics. To answer this question, Fendt, together with his colleagues, could only after observing the largest and closest to us supermassive black hole of the galaxy M87 in the constellation Virgo. Jet black hole located in this galaxy was discovered almost a century ago. Its remoteness from the Earth is only 54 million light-years, which makes it possible to see it with the help of the simplest terrestrial telescopes.

Thanks to the radio telescopic network VLBA, which included a dozen powerful astronomical radio trains, scientists managed to capture the “leg” of the jet, and approach it at a distance about 7 times smaller than the size of the solar system itself. Precisely, having worked hundreds of the images, astronomers from Germany determined the “dancing” behavior of the jet – a constantly swinging base and streams of matter, which are further accelerated by magnetic fields. Because of such oscillations, the impression was that the flow movement occurs at a superluminal speed, because matter periodically spiraled into a spiral rather than lined up in a straight line.

According to the researchers’ assumptions, the source of these fields that surround the black hole is the accretion disk, the so-called “donut”, which forms red-hot gas and ground matter of stars and planets. The interaction of powerful magnetic fields in this “donut” and has an effect on the behavior of the jet, and may even contribute to its nucleation, as if “moving” the point at which the ejection of the black hole is located.

As on the Sun, flashes and spots born on its surface, black holes emit similarly. Reliability of the “kinship” of these processes astronomers hope to verify in the future after more detailed interpretation by participants in the Event Horizon Telescope project of images of the M87 core received earlier this month.