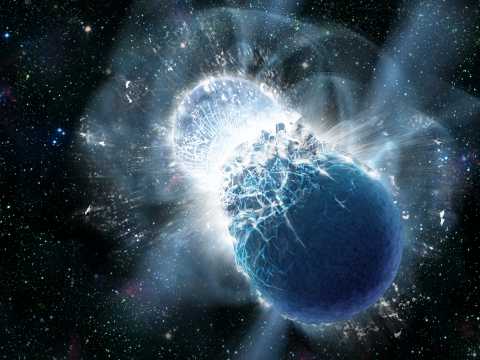 The existence of gravitational waves was derived from the equations of the General Theory of Relativity even under Einstein himself: these “folds” of the space-time continuum arise in the course of the most energetically powerful events, the interaction of extremely massive bodies. However, due to numerous technical difficulties, their experimental searches dragged on for a century, and a formal discovery took place only in 2015, when the LIGO detector detected a gravitational wave from a pair of rotating black holes around each other. By now, three sources of gravitational waves have been detected in the sky – all of them are pairs of black holes. In parallel with the American LIGO in Europe, the VIRGO detector also follows them.

Perhaps, their tandem will bring a new remarkable finding in the near future: Texas astrophysicist Craig Wheeler, working with gravitational wave detectors, recently published on Twitter a message: “The news from LIGO. A source with an optical range. You will be shocked! “Earlier in his microblog, his colleague Andy Howell said:” Today is just the night when the results of astronomical observations tell a story much more interesting than anything that has ever been told by people. ”

With this, rumors began to circulate. Judging by the mention of the optical range, it is a source of gravitational waves, which, unlike black holes, radiates in this part of the spectrum. Judging by the fact that it emits gravitational waves, it should be a fairly massive object, fast moving and dense. All this indicates a potential possibility – a pair of neutron stars.

It is rumored that at the moment several suitable telescopes, including the Hubble Space Observatory, conduct observations to confirm the discovery of LIGO, so the official announcement is delayed. Representative of LIGO David Shoemaker (David Shoemaker) does not disclose details. He only said that closer to August 25, indeed, some extremely important and interesting new data should arrive, and perhaps then we will know the details.

However, experts have already decided that this is a galaxy NGC 4993, located in the constellation Hydra at a distance of about 130 million light years. There is a well-known pair of neutron stars, which Hubble watched the other day: for some time the received pictures were, as usual, in the public domain, but were later removed. It remains only to wait.