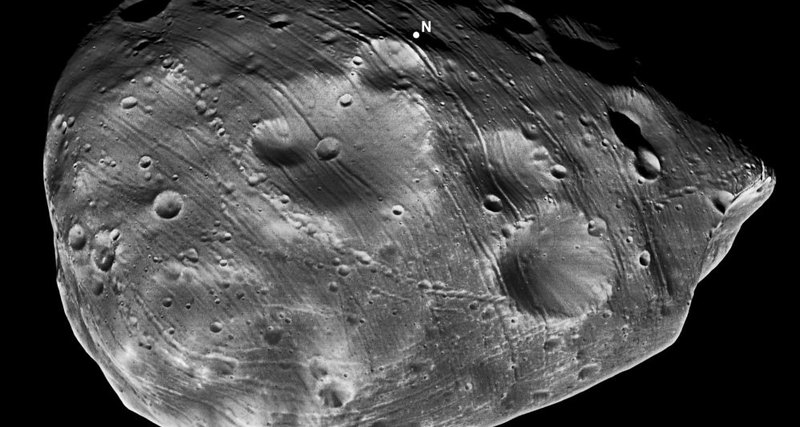 The surface of one of the two satellites of Mars is covered with strange grooves. They were discovered at the time of the first studies of Mars by automatic stations in the 70s of the last century. Since then, scientists have been trying to explain this picture.

To begin with, let’s clarify – Mars has two natural satellites, Phobos and Deimos. Phobos rotates at a lower orbit and, sometime in about 43 million years, will fall to Mars. This satellite is a little larger than the “neighbor”, but, in both cases, it is a question of very small celestial bodies. The average radius of Phobos is approximately 11 kilometers. The satellite has an irregular shape far from spherical, hence the strange terminology. Phobos has a low density – so much so that about 60 years ago the hypothesis about its hollowness was seriously discussed.

The surface of Phobos is covered with more or less straight grooves, diverging in different directions from the Stickney crater. This crater is the largest “attraction” of Phobos, formed once when it collided with some other body of asteroidal size. Furrows diverging in different directions have a width of a hundred or more meters with a depth of the order of the first tens of meters.

The appearance of these furrows has traditionally been attributed to the gravity of Mars and the tidal forces generated by it. It was meant that the planet is slowly destroying its satellite, which once collapses completely, and the crater in this case has a purely auxiliary value – the body cracking began with the impact on this particular place. And it would be possible to hit somewhere else.

An alternative theory, according to which the furrows on the surface of Phobos created by fragments of a former collision with an asteroid that formed the Stickney crater, has so far stumbled upon significant difficulties. Not all the grooves diverge radially from the crater, they sometimes intersect. Moreover, some of them cross the crater, which obviously means that they formed later.

Ken Ramsley from Brown University tried to explain these oddities. He created a mathematical model of the movement of debris along the surface of Phobos, which takes into account the low gravity of a celestial body and its low density. It turned out that the fragments knocked out by the collision could well have made a world tour, rolling on the surface of the satellite and leaving noticeable traces. 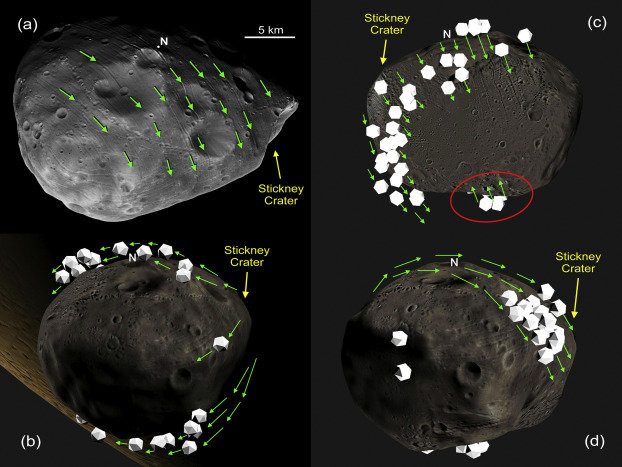 The model showed that the paths of the boulders can level out, forming parallel tracks. Models also provide a potential explanation for some of the other, more mysterious patterns.

Modeling shows that, due to the small size and relatively weak gravity of Phobos, stones ejected from the crater can roll for a very long time without stopping, which would probably have happened on a larger body. This circumnavigation may explain why some grooves are not radially aligned with the crater. Boulders that begin to roll along the eastern hemisphere of Phobos create furrows that seem to be shifted to the side in the western hemisphere.