Scientists have found out how all solar flares arise 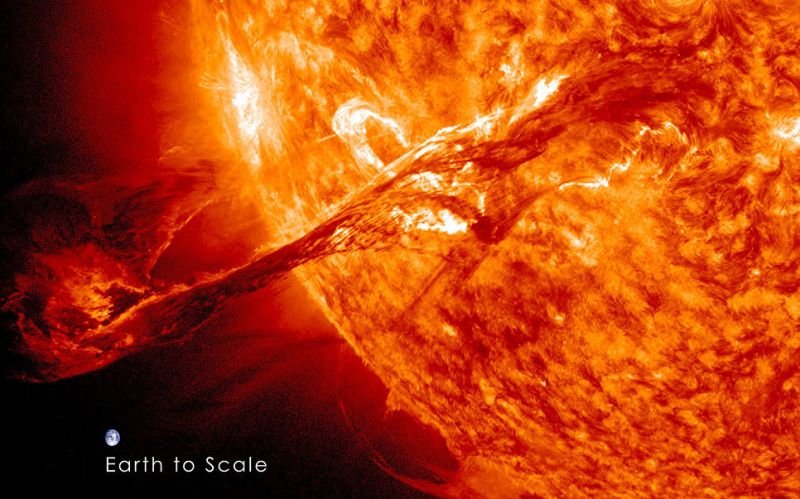 Small flashes on the Sun and powerful coronal discharges arise under the influence of the same forces that cause the magnetic field of the luminary to burst outward and “pull” the hot matter of the luminary behind it, according to an article published in the journal Nature.

“Understanding how all types of outbreaks occur on the Sun is necessary in order to predict the nature of its activity in the future.” Powerful coronal emissions can disrupt satellites and lead to other unpleasant consequences, and therefore it is extremely important for us to know how they arise and how They can be watched, “says Peter Wyper of the University of Durham, UK.

The Earth and the Sun have powerful magnetic fields that constantly interact with each other and whose structure is continuously changing by itself. These changes often lead to the fact that the lines of force of their fields are broken and then reconnected with each other.

This phenomenon, which physicists call “reconnection,” leads to the allocation of a huge amount of energy, often with an explosive character. This is the cause of the outbreaks on the sun and the northern lights at the poles of the Earth – the released energy of the magnetic field accelerates particles in the vicinity of our planet and causes the Sun to throw out huge masses of hot plasma during flares on its surface.

Viper and his colleagues from NASA studied how two different types of outbreaks are born on the Sun – powerful coronal plasma outbursts (CME), capable of destroying civilization and depriving the Earth of its radiation shield, and small flares, so-called coronal jets that actually do not affect On “space weather”.

As the scientists note, both those and other outbursts of the matter of the Sun are due to the fact that the lines of the magnetic field of the light for some reason go out into open space, dragging the red-hot plasma behind them.

Whether these lines leave the bowels of the Sun for the same or different reasons remains a matter of debate among scientists. Some astronomers believe that both large and small coronal emissions arise as a result of the “catapulting” of so-called filaments, lines separating regions of different polarity on the surface of the Sun, with a sharp change in the polarity of these regions, while others suggest that coronal jets arise as a result of Other processes associated with the birth of the solar wind, rather than flares.

British and American scientists have checked whether this is really so, by creating a computer model of miniature coronal emissions, similar in size to coronal jets. According to the scientists, the comparison of the results of calculations and real data and photographs of jets on the Sun should demonstrate which of the two hypotheses is correct.

According to Viper and his colleagues, the first assumption was correct: jets and powerful coronal emissions are most likely formed due to the same mechanisms associated with the behavior of regions of different polarity on the surface of the Sun. If this is so, then this will significantly simplify the prediction of flares on the Sun and help scientists to quickly learn about the possible danger to life of technology and people on Earth.

In the near future, Viper’s team plans to test its calculations, studying how large flares on the Sun occur in regions with different configurations of magnetic fields, and how fields and plasma flows behave when they are born.