Scientists have found out how the comets are born 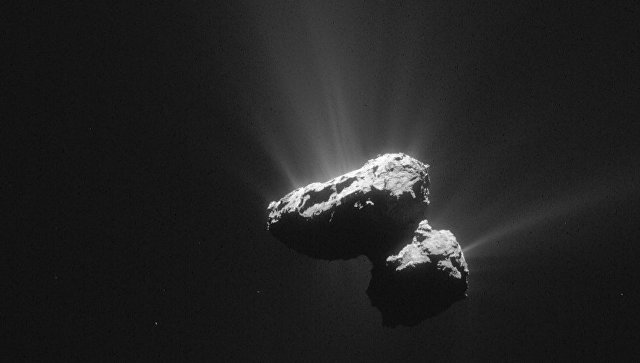 Pictures and scientific data from the Rosetta probe helped scientists to prove that comets arise as a result of the gravitational collapse of small clouds consisting of small “cosmic pebbles” and ice, according to an article published in the journal MNRAS.

“We showed that the comet Churyumov-Gerasimenko was born as a result of a” soft “gravitational collapse of a cloud of dust and pebbles.Unfortunately, we can not yet say how the halves of its” dumbbells “arose – whether they were separate celestial bodies that have collided after their birth, or they are part of a whole, “says Jurgen Blum of the Institute of Geophysics and Extraterrestrial Physics in Braunschweig, Germany.

The world before the beginning of time

Today, scientists have little doubt that the planets begin their birth inside a flat gas-dust disk filled with small particles of dust and dense gas clouds, and their formation ends in a series of collisions of planetsimals, the “embryos” of planets the size of Vesta or Ceres, and large comets and asteroids.

“In the middle” there is a gaping theoretical gap between them – until the planetologists come to a common opinion about what happens after the single dust grains are clipped into relatively small clumps the size of a centimeter. There are several different theories, verification of which was impossible until recently.

The answer to this mystery planetologists try to find two ways – watching the newborn planetary systems with the help of microwave telescopes, and studying the grains of dust that have been preserved in the bowels of comets since the birth of the solar system. The first studies of this kind were carried out three years ago by the Rosetta probe and the downhole module Fila, which was dropped on the surface of the comet Churyumov-Gerasimenko in November 2014.

Bloom and his colleagues used the data collected by Fila and Rosetta to reveal one of the mysteries of this “theoretical emptiness” and to find out exactly how the particular comet originated.

As the scientist explains, the internal structure of the comet, as well as the dimensions and mass of dust particles that were found in its “tail” by Rosetta instruments, directly reflect the conditions under which it was formed. For example, if it were born during a series of collisions of more and more large “embryos” of planets, then its matter would have been partially melted and had a heterogeneous mineral and chemical composition.

This, as shown by the data from the probe and the descending module, most likely did not happen – many dust grains found on the Churyumov-Gerasimenko comet have a rather fluffy and “loose” shape and at the same time they have large dimensions. This means that the nucleus of the comet was born in a sufficiently “quiet” environment and at sufficiently low speeds of movement of dust and gas that gave rise to it.

Its progenitors, as shown by probe measurements and theoretical calculations of scientists, were relatively large dust grains, whose radius was from one to six millimeters. These dust particles gradually accumulated at one of the points on the far fringes of the protoplanetary cloud, and caused a miniature analog of the gravitational collapse, which usually precedes the birth of stars and planets.

As computer models show, this process proceeded rather slowly, which led to the fact that dust particles were evenly mixed in the bowels of the comet and “glued together” in almost primordial form, and a multitude of voids appeared inside the celestial body. On the other hand, now we can say with confidence that the comet was born in the “one sitting” – there were no intermediate stages in its birth.

Similar results of the calculations are in good agreement with the data on the structure of the depths of the comet Churyumov-Gerasimenko, which were obtained by “Philo” during the unsuccessful landing and announced in the summer of 2015. On the other hand, they also testify that “shaggy monsters” could not be formed in the same way as planets presumably do, which is not predicted by theory and is a surprise for planetologists.