Scientists have found out what will happen after the death of the Sun…. 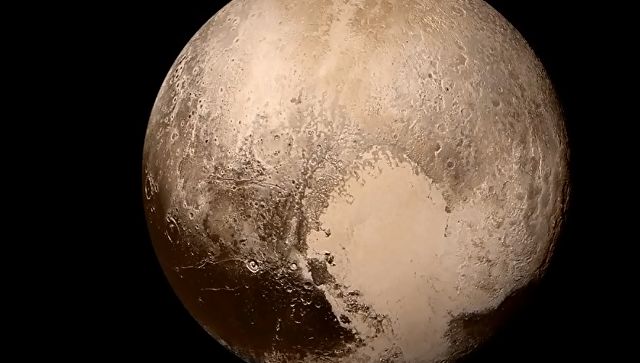 Famous astronomers Alan Stern and David Greenspoon called for returning Pluto’s status as a full-fledged planet, based on the data on its geology, which were extracted by the probe New Horizons.

“The decision to redefine the concept of the planet, as well as to deprive Pluto of this title, was profoundly wrong – even the supporters of such an action criticized it, it was taken by a small group of astronomers at a meeting in Prague in 2006, when almost all of its participants had already parted and included a lot of critical shortcomings, “- write Stern and Greenspoon.

Prior to the beginning of this century, astronomers believed that there are nine planets in the solar system, beginning with Mercury and ending with Pluto. In the late 90s and early 21st century, they discovered dozens of large dwarf planets behind the orbit of Pluto, which made them doubt that it really is a planet. For example, as scientists at that time believed, the dwarf planet Eris is beyond the orbit of Pluto and outperforms it by its mass.

In this regard, the controversy that ended in August 2006 with the victory of “plutonosceptics” broke out. With the filing of Michael Brown, a famous astronomer from the California Institute of Technology who discovered Eridu, the International Astronomical Union officially “demoted” Pluto, moving it from the category of planets to the number of dwarf planets.

In accordance with the definition of MAS, the planet has the right to be called only that object that rotates around the Sun, has enough mass to acquire a spherical shape, and at the same cleared its surroundings of asteroids and other “garbage”. For Pluto, the last item is not executed, so he lost this title.

Such a decision caused a sharp rejection among many astronomers, including Alan Stern, whose team just launched the probe New Horizon to the already degraded planet. He publicly called this decision of the IAU “complete nonsense” and promised to provide evidence of his rightness.

“Even if we just look at the solar system, this decision will be perplexing.” It turns out that Earth was not a planet in the first 500 million years of its life, since its orbit was not cleared of large asteroids and other “garbage.” Or, if today we, for example, move the Earth or another world into the asteroid belt, they magically cease to be planets, “- write astronomers.

In addition, as Stern notes, the discovery of several thousand exoplanets, as well as the data collected by New Horizons during the rapprochement with Pluto, point to the uselessness of such a formalistic approach to determining the status of celestial bodies. The small moons of Saturn, considered to be planets, actually have more in common with asteroids than with Pluto and his “degraded” cousins.

“In fact, astronomers” violate “this ruling of the IAU every time they call any world discovered outside the solar system, a planet, and discuss geology and other properties of the dwarf world.” On the other hand, journalists and supporters of this idea continue to distort the image of Pluto in minds of the townsfolk, schoolchildren and students, equating it in status to ordinary asteroids, “the scientists continue.

A year ago the scientific team of New Horizons had already proposed a new definition for the planet, more related to its geological properties, rather than to the orbit, and sent it to the IAU for consideration. As Stern and Greenspoon hope, the governing bodies of the IAU will agree with their idea in the near future and return to Pluto the status of the planet.

“The word planet itself appeared much earlier than science and astronomy, it is impossible to drive common sense into any linguistic framework.The meaning of words is determined by culture, not by voting, and the same applies to scientific paradigms,” scientists conclude.