Scientists have found that our Galaxy is stretching and twisting 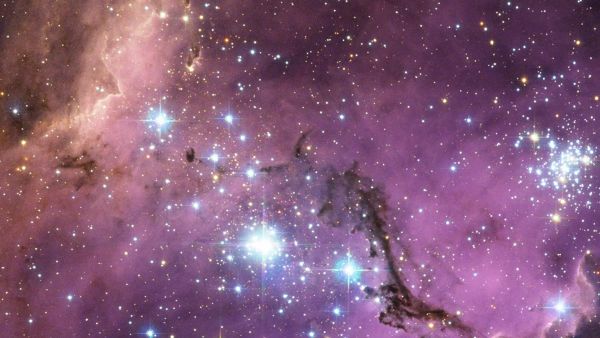 Astrophysicists have found that the Milky Way is twisted and deformed by the gravity of its satellite galaxy, the Large Magellanic Cloud. The discovery refutes the existing opinion that our Galaxy is relatively static. The results of the study are published in the journal Nature Astronomy.

For a long time it was believed that the Milky Way, the galaxy in which the solar system is located, was relatively static. However, about 700 million years ago, its gravitational interaction with the Large Magellanic Cloud (LMC) galaxy took place. By cosmological standards, this is relatively recent.

Using a sophisticated statistical model that calculated the speed of the Milky Way’s farthest stars, University of Edinburgh scientists Michael Petersen and Jorge Peñarrubia have shown that the impact of a collision with this small galaxy, which became a satellite of the Milky Way, is still felt today. since.

The LMC galaxy is visible as a faint cloud in the southern hemisphere night sky, but, like the Milky Way, it is surrounded by an extended halo of dark matter. Elusive particles of dark matter do not absorb or emit light, but they have a serious gravitational effect on the movement of stars and gas in the Universe.

The researchers found that the enormous gravitational force of the LMC’s dark matter halo attracts and twists the spiraling disk of the Milky Way toward the constellation Pegasus at a speed of 32 kilometers per second, or 115,200 kilometers per hour.

“We were able to show that stars at incredibly large distances, up to 300 thousand light years from us, retain the memory of the structure of the Milky Way before the fall of the LMC and form the background against which we measured the speed of a galactic disk flying in space, attracted by the LMC’s gravitational force, – Petersen said in a university press release: “To describe the evolution of our Galaxy, it is now necessary to create a new generation of models of the Milky Way.”

“This discovery definitely breaks the spell that our galaxy is in some kind of equilibrium. In fact, the recent fall of the LMC is causing great disturbances in the Milky Way. Understanding this could give us an unprecedented insight into the distribution of dark matter in both galaxies,” adds Peñarrubia.

Now astronomers intend to find out the direction of motion of the LMC galaxy at the moment when it collided with the Milky Way, and the exact time of this event. Scientists hope this will allow them to build a new dynamic model of galaxies and calculate the amount and distribution of dark matter in the Milky Way and LMC in unprecedented detail.