A group of astrophysicists created an unprecedented detailed map of the polarization of infrared radiation in the vicinity of a black hole in the center of the Milky Way.

In the center of our Galaxy, like most others, there is a supermassive black hole – SgrA *. It does not emit its own light, and therefore it is impossible to photograph it, but it radiates matter in all its surroundings in all ranges. This radiation can be registered with powerful telescopes. This time, scientists used the Large Canary Telescope and measured the radiation coming from the center of the Galaxy in the infrared region of the electromagnetic spectrum.

Passing cosmic radiation through a polarization filter, scientists measured its polarization in the region of interest in the Galaxy. Making a correction for the clouds, which almost did not exist over Hawaii for seven days of observation, and for cosmic dust, on which radiation is scattered along the way to the Earth, scientists obtained a polarization map of IR radiation in the vicinity of a black hole with an unprecedentedly higher resolution.

On the map, two regions of high polarization and magnetic field lines along which interstellar matter is built up are clearly visible-hot gas and dust (thin white threads on the image). The size of the region studied is about 1 x 1 st. of the year. Near the black hole, the bundles of filaments change direction. 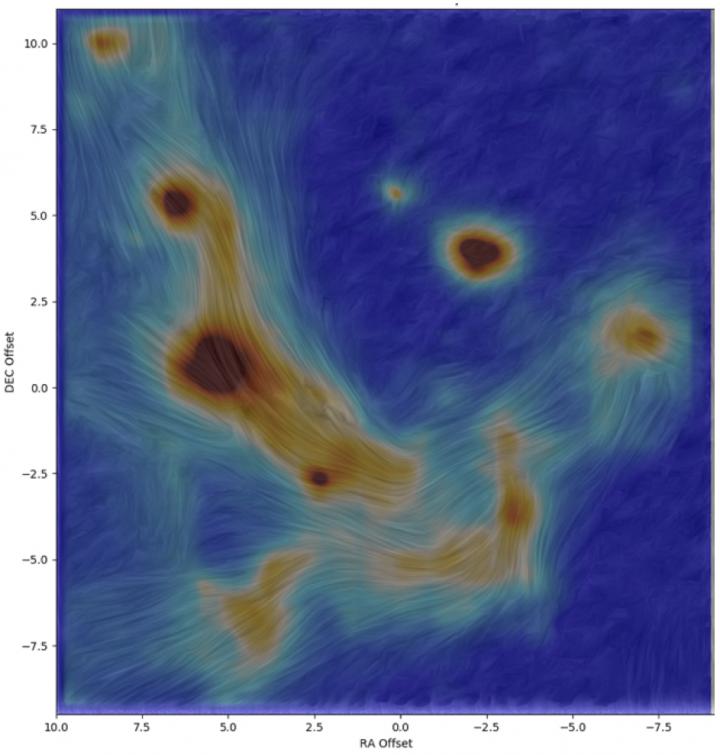 The scientists noted that even bright stars located in this region of the Galaxy, although they have their own strong magnetic fields, but have little effect on the polarization of the radiation around them. The nature of the source of the magnetic field that permeates the center of the Galaxy is not exactly known, but astronomers suggest that it is somehow connected with the gravitation of the black hole.