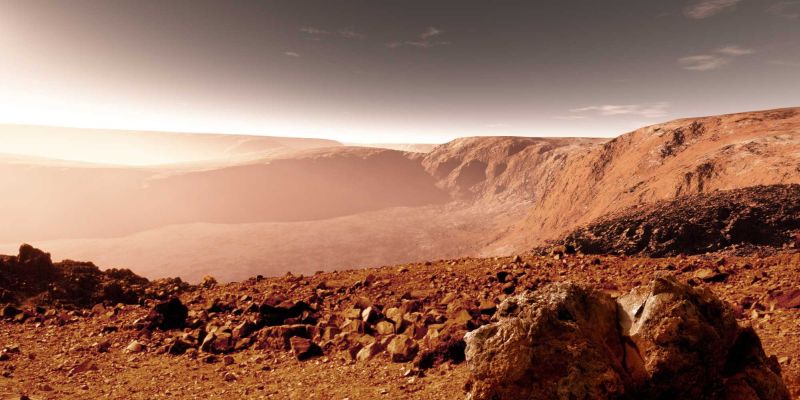 Data on Mars, which scientists have for today, eloquently testify that the Red Planet once had a powerful enough atmosphere, but then, due to unclear circumstances, almost completely lost it, turning into Mars, as we know it now: cold, dry And almost airless. The group of scientists, based on the latest data from the Martian satellite MAVEN, published in the March 31 issue of Science its assumptions about the likely course of the disaster.

Mars is subjected to constant bombardment by charged particles that are part of the solar radiation. Under their influence, the atmosphere of the planet slowly evaporates, now the speed of this process is about 100 grams per second. To determine which part of the atmosphere was lost during the existence of the planet, the main developer of MAVEN Bruce Jakowski (University of Colorado) and his colleagues measured and compared the content of two argon isotopes (38Ar / 36Ar) at different altitudes in the atmosphere of Mars.

Using these measurements and assumptions about the content of argon isotopes in the early Martian atmosphere, the team of researchers came to the conclusion that at least two-thirds of this gas was irretrievably lost in outer space. Extrapolating the data on argon to carbon dioxide, the researchers argue that the fate of this gas has developed in a similar way: most of it was carried into space by the solar wind.

Having a thick atmosphere filled with carbon dioxide and other greenhouse gases, the early Mars was warm enough for the existence of liquid water and, more importantly, for evaporation. Water vapor, as is known, is also a greenhouse gas. After all this has disappeared, Mars took a relatively quick, modern look, becoming dry, cold and completely lifeless.

It is worth recalling that the space vehicle MAVEN (Mars Atmosphere and Volatile EvolutioN) is an artificial satellite of Mars, launched in the autumn of 2013 and reaching its destination in little less than a year. The device is intended for research of the Martian atmosphere, its structure and composition. Among the main scientific tasks of the device is the determination of the rates of loss of the atmosphere, the factors that affect this process, the effect of gas losses on the climate changes of Mars now and in the past, and also the ratio of stable isotopes in the atmosphere of Mars.