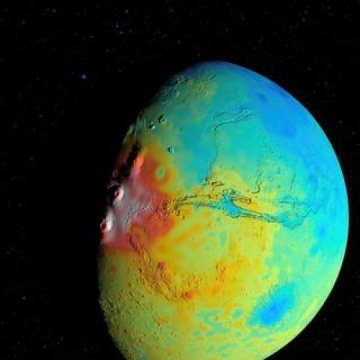 Scientists have found evidence that the bark of Mars is not as dense as previously thought. This fact will help researchers in better understanding the inner structure and evolution of the Red Planet.

Scientists at the American Space Agency believe that a lower density probably means that at least a portion of the cortex is. However, while scientists are not ready to name the causes of this phenomenon and to report what minerals can be a Martian crust.

“The bark is the end result of everything that happens to the planet during its formation,” said Sander Goossens of the Goddard Space Flight Center in Greenbelt, Maryland. Goossens is the lead author of the research. He detailed his research in the periodical Geophysical Research Letters.

The assumption about the density of the Martian crust was made on the basis of data obtained by the Martian spacecraft, which function in orbit around the Red Planet.

In the near future, scientists hope to disclose the composition of the Martian crust, but so far they can not do it.