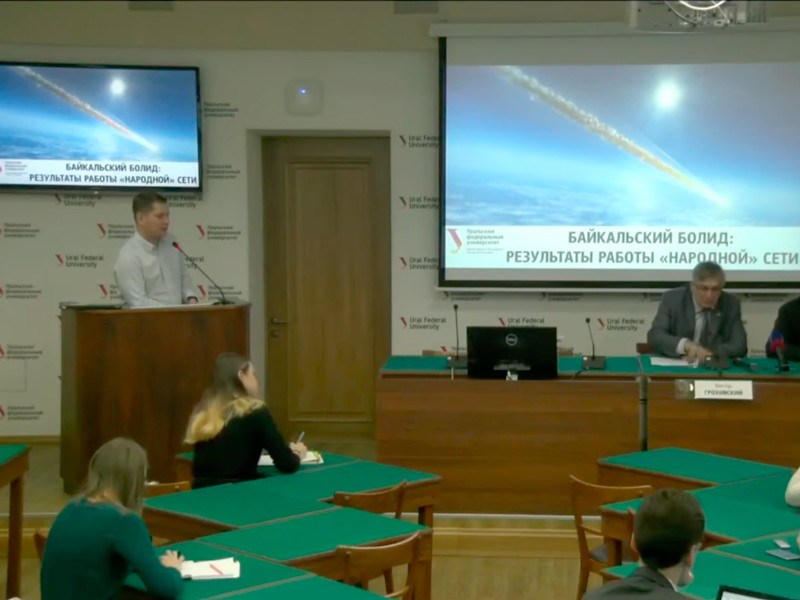 Scientists by results of research of videos, depicting the flight of a luminous celestial body in the area of lake Baikal on October 25, came to the conclusion that it was a meteorite weighing 50-80 pounds, which is completely burned up in the atmosphere. The researchers told at a press conference at the Ural state Federal University in Yekaterinburg on 8 November.

It is now established that the so-called Baikal bolide entered the atmosphere at an angle of 20 degrees at high speed 20.6 km/s over Buryatia, – said the Director of the astronomical Observatory of Irkutsk state University Sergei Yazev, who studied videomaterialy together with well-known local researcher of meteorites Victor Grokhovsky.

According to Yazev, at the time of entry into the atmosphere of the space object weighed 50-80 kg and reached a diameter of 25-35 cm Moving from the Southeast to the Northwest, he flew across the lake completely dissipated in the atmosphere at an altitude of about 37 km in the Irkutsk region..

We know nothing about its chemical composition, but we assume that it was a stone meteorite, since they account for more than 90% falling to the ground of the heavenly bodies, – said yaz. It’s very unlikely that it was a fragment of a comet, at this speed it would have collapsed much earlier.

The bright green glow of the car says nothing about its composition, he added: When a body flies at a high speed, anything will glow green. It was found that Baikal, the car has nothing to do with the meteor stream Taurida, although it was previously assumed that it was his chip, said Yazev.

To reconstruct the trajectory and flight parameters of the Baikal race car helped the video made by the witnesses. In our region, the work of the people’s fireball network – said the researcher. – People called and reported their observations, have provided a recording, answered clarifying questions.

According to him, scientists have a record of a flying car made from Ulan-Ude (285 km), Severobaikalsk (180 km), Irkutsk (335 km), Slyudyanka (410 km) and one of the bases of oil companies in Ust-Kut districts district of the Irkutsk region (430 km).

One of the records provided by Irkutsk oil company (INK).